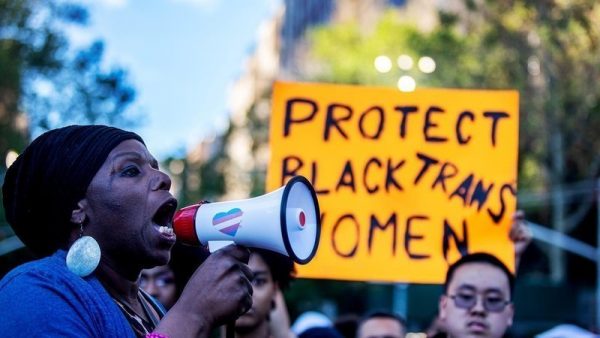 Trans Day of Remembrance: A Letter of Blessings to My 16-Year-Old Self

When I was 16 years old, I went on my very first date. I was young and cute and had blonde streaks I copied from one of Destiny’s Child’s early videos. It was my “Bug a Boo” phase, a time in my teen years where I rarely went anywhere without a cowboy hat.

Adrian was tall and lanky and the color of fresh sugar cookies. He was the first man to ever ask me out.

These were things any passing observer could see. But underneath my PYT surface, was a young insecure girl, tiptoeing a delicate line, just months into her transition. Adrian could see the black pants and white blouse and pink lip gloss. He couldn’t see the shoulder pads I wore in my jeans or the cutlets I stuck in my bra for a curvier look.

Like any other first date, Adrian didn’t really see the girl he was hoping to woo — possibly into his bed.

It was our fifth or sixth time prancing out as female in public, and Adrian was the first guy to actually approach any of us, plucking me out of the group.

At 16, manny of us just want to feel special and validated. And in my romance-crazed mind, I yearned to be loved. At 16, he was the Prince who would love me and save me and transform all my woes. He was my happily ever after, and all he said was “Hey.”

He asked me my name. I said Janet. He asked me my age. I lied and said I was 18. He asked if he could have my phone number. I gave him my pager instead because my brothers weren’t used to calling me Janet yet.

Upon departing, he kissed my hand and said he looked forward to seeing me soon. I felt lucky.

Returning to my friends, they gagged over the fact that I seemingly just passed as any other girl. I was the first in the group to actually be seen as I was without any disclaimers.

“Well make sure you pluck those umis before your first date,” one friend playfully read me. Umis in Hawaiian slang was facial hair, of which I swear I did not have.

A week later and I was alone with Adrian in his red sedan, which thumped with a Jagged Edge song as we made our way to the Spaghetti Factory.

For the first time in my young life, I felt authentic, like any other girl. I felt I had died and gone to post-transition heaven, where we all could be exactly who we are. This was months before I began hormone therapy, months before I asked teachers to call me Janet, months before I’d get called into the vice-principal’s office for wearing a skirt to school.

It was the dawn of my medical transition and I was desperate to be seen as the girl I knew I was. And Adrian saw me that way, and I didn’t want it to end. He told me I was beautiful, placing his hand on the small of my back as we walked into the restaurant.

The Spaghetti Factory was my choice. It was the only restaurant I knew that was kinda fancy, yet affordable. Hawaii didn’t have the Olive Garden, but we had Spaghetti Factory which was the venue for my Papa’s birthdays every year, where I always ordered the spaghetti with Portuguese sausage and garlic bread.

Randomly, I’d look around to see if anyone I knew was in the restaurant. But as the dinner progressed, the nerves subsided and I fell into the groove of just two people learning one another. I talked about my brothers and school and my dreams of moving away from Hawaii. He talked about moving to Hawaii, being homesick for Ohio and the fear of having to actually use the skills he was trained for as a new Marine.

It was then upon that revelation that I saw Adrian not as my Prince, but as a young guy, only three years older than me preparing for war. He was a young man finding his place in the world. And we were just strangers getting to know one another.

And just like that, just when I was enjoying myself a voice screamed, “LIAR!” in my head. I had to tell him, I told myself. I didn’t not want to tell him, but I reasoned that we hadn’t been physical yet so it was all okay.

We left the restaurant, and strolled on Ala Moana Beach, where Adrian reached out and found my hand. It was a scene out of a romantic comedy, and I was the Julia Roberts character: frizzy-haired, toothy and full of nervous energy.

“I never heard the ocean back home,” Adrian said. “I don’t think I’ll ever get used to that.”

“I had,” I lied, marveling at the whooshing, the strength of the Pacific, which blanketed the only home I knew.

Like the vast ocean, I didn’t want this night to end.

Back in the car, just blocks away from my house, we were silent. I was anxious about how I’d tell him (Over the phone? Outside the car? In a letter?) and I think he was pondering how he’d kiss me, because that’s exactly what he did when we pulled up to my driveway.

He was soft, gentle, a bit off target, kissing me on the left side of my mouth.

“When can I see you again?” Adrian asked with that glow of infatuation.

It was then that I stopped being a girl, and became a woman.

By the expression on his face, he had no idea about my past, about my present, about the girl he had just kissed.

“I’m in transition, like,” I stammered to continue. “I’m waiting to get my sex change,” I said, lying because actually having to say that I was years away from having any kind of surgery and months from beginning hormone therapy was just too much for my 16-year-old self to own up to.

He pulled away instantly. His face turned from the sweet, soft-eyed expression I had seen all night to one that was rough and suited not for a girl but for men in battle. It was the first time in my life that I felt physically afraid.

“I can’t believe this,” I remember him saying, not so much to me, but to himself. “Why didn’t you tell me earlier?”

Because you’d look at me how you’re looking at me now. Like some creature from a faraway land with different values and dreams and feelings, I wanted to say. Instead, I said, “Sorry,” seemingly apologizing for who I was, ashamed of who I was, too young to own up to my struggles and fears and hopes and dreams.

Heartbroken, I opened the door to his car. I felt rejected and went to my room, crying over how unlucky I was, how no one would ever love me because I was different. Why did I have to be this way? I plead to everyone and no one.

Now, more than a decade later, I look at how lucky I was to get to walk out of that car. I now know the world can be a cruel place. I could have been hit or beat or killed. A victim of a hate crime, one that could have been deemed a mistrial due to the “trans panic defense,” one where my family would have no closure, one where I’d be buried as a boy because no one but my friends knew my dreams of womanhood.

This is the story of hundreds of young girls, many who are not here with us, and many who, on Transgender Day of Remembrance, we’re paying homage to, remembering their hopes and dreams, celebrating their lives cut short, and mourning their tragic murders.

Gwen Araujo was murdered in 2002 by four men she hung out with socially and saw her as female. Though she was allegedly romantically involved with a few of them, they beat her unconscious and fatally struck her with a shovel upon discovering she had a penis. She was 17 years old. That story is too close to home.

So is the heartbreaking stories of Stephanie Thomas, 19, and Ukea Davis, 18, two best friends who met as teenagers, transitioned together (just like my best friend Wendi and I) and tragically died together in Washington, D.C. in 2002. Sitting in Stephanie’s car late at night, the two girlfriends were gunned down with a semiautomatic weapon from a passing car; their bodies found with “at least 10 bullet wounds each.”

And Shelley Hilliard was reported missing by her mother Lyniece Nelson in Detroit in October. Weeks later, a charred torso was found near a highway in Detroit’s east side. The corpse was later identified as Shelley’s, emblazoned with her cherry tattoo. Shelley was only 19. “She was loved by a lot of people, a lot of friends a lot of family,” her mother told the Detroit News. “She just brought joy to everyone that she came in contact with. She was always there for her family.”

The names continue to scroll in my heart and the hearts of other trans women and their loved ones, and siblings in solidarity. I can’t forget their faces. They remind me in an instant how lucky I was to get out of that car (and many others to come) as I navigated my path to womanhood, as I became the person I am now counting my blessings that I never came face to face with this type of wretched intolerance. And it also makes me mourn, mourn the fact that I have to say that I was lucky to have survived that date, to acknowledge that we live in a world where a 16-year-old girl would have to fear being beat for being exactly who she is.

I’ve come out – after years of people telling me to stay stealth, to live in anonymity, to safely hide where I’ve been — because we are not shadows, we are not bodies, we are people. These young girls were people’s daughters, young people who were loved. And in an instant, they were extinguished.

Trans Day of Remembrance is about never forgetting, never extinguishing the light of Gwen, Stephanie, Ukea, Shelley and thousands of other women, and never forgetting that it will take all of us to dismantle these systems of oppression that make young trans women vulnerable to intolerance, brutality and violence.

PrevPrevThe Larry King Tragedy: Seeing Myself in the Gender-Nonconforming Teen
Next‘I Am Jazz’: My Conversation with the Trans Tween & Her MotherNext