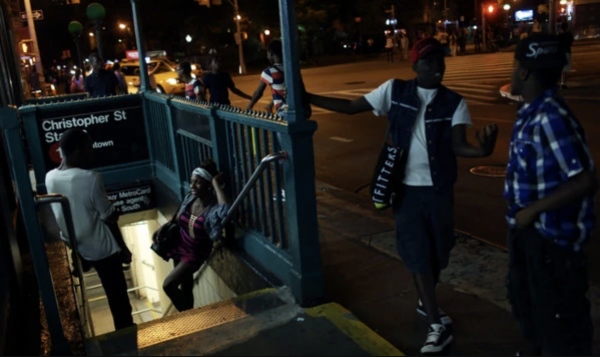 I was sitting at a coffee shop yesterday with my friend Darnell L. Moore discussing why we write and how revolutionary it is to call ourselves “writers.” He then mentioned the concept of living history, and the importance of disenfranchised communities (who are often not actively heard by the masses) to archive their lives and create their living history.

Darnell’s comments made me think about the blogs that I read daily and the Tweets and the essays and videos that actively are creating images and words about ourselves, our lives, our work and our struggles. I thought about how revolutionary it is that we’re creating our own reflections, a record of our lives right now.

It’s this agency of building this living history that enamors me about digital journalism and the way we live online and off, and I left our coffee date inspired to continue Tweeting, Tumbling and writing.

As I was preparing for bed, though, I read the New York Times‘ piece “For Money or Just to Strut, Living Out Loud on a Transgender Stage” by Sarah Maslin Nir on trans women who spend their evenings on New York’s fabled Christopher Street in the West Village. The piece, featuring trans women of color, was “the fifth in a series of articles exploring how people in the New York City area spend their summers after dark,” according to the Times.

When I initially read it, I smiled. I thought, it’s a slice of life fluff piece. They let the women express themselves, define their space and why this historic block was important to them. But then I read it again and I wondered about the journalist’s methods, I wondered about how these women were approached, and I wondered what they thought of the piece and how much of what they said was actually used.

Then I found myself angry, not because of anything the women said, but about how what they said was then rebutted by the observations of the writer, who commented on their actions, on their dress, on the way they related to one another, and on the comments of passersby. I get intrigue, I understand curiosity, but I’m pretty damn positive that these women see their lives on Christopher Street as more than just a “transgender runway” (Ok – WTF is a “transgender runway”?!) and a place to strut in “buttocks-revealing denim shorts.”

Do you remember when your parents told you to stop staring? I do. I think we can all agree that curiosity is natural, but staring is rude, and this piece by the New York Times Metro Desk, headed by Carolyn Ryan, is an exhibition in staring taken as fact. Well it’s actually gawking at these women and at us and at #girlslikeus everywhere. It’s dehumanizing, and honestly this goes beyond a “choice of words” because the New York Times‘ limiting, lazy portraits of trans women of color in New York City has become habit as evidence in their piece on Lorena Escalera’s life and death in May, which I criticized alongside Feministing’s Jos Truitt, GLAAD, Wild Gender, Pamela’s House Blend’s Autumn Sandeen and xojane’s s.e. smith.

My problem with this piece is that trans women, specifically those of color in this gentrified environment of New York City, are under layers and layers of oppression – none of which are examined and or mentioned in this paper of record. As Lourdes Hunter wrote to me in a Tweet: “[There’s] no talk about why these girls are out there or how the city plans to address the lack of services for at risk youth smh.” Then she continued, “The Vill is flooded nightly with youth with no where else to go; homeless, penniless without families or a city who gives a damn.” And then I found myself even more upset because I knew I was not alone in my frustration over the lack of depth in this piece. Sure, it’s a slice-of-life, fluff piece about summer nights in New York City. But fluff pieces usually don’t show women tearing one another down with “screaming fight[s],” violence (the writer mentions a past incident at a Dunkin Donuts) and criminalized sex work. They show the women at odds with one another, attacking one another. They are not merely fighting each other, they’re fighting to survive on those streets. And where are the women who spend their nights on Christopher Street doing outreach, making sure their sisters are protected and well equipped? Where’s the joy and fun of the women who are not there to make coins? And what about the kiki sessions that I’ve been privy to on Christopher?

Let me summarize the @nytimes: Beware gentrified West Villagers bc the scary trannies come out at night: nytimes.com/2012/07/25/nyr… #GirlsLikeUs

I’ve never Tweeted about trannies before, but it seemed to me that the Times chose to use this Summer Nights installment to warn rich home owners and renters in the West Village of the scary trannies that come out at night. And that is not okay. Try sitting down with these trans women and ask them about their lives and write about their lives, not just about the way they parade past you on the street.

With my recent media critiques of the New York Times, I’ll probably never reach my goal of getting Michiko to read my memoir. But our living history is so much bigger than the personal dreams I have for myself. I urge us to mine the anger and frustration and disappointment into creativity and expression. Don’t let the New York Times stand as the record of our lives: Trans women are so much more than the less-than-human portraits they continue paint of us.

Express why this piece bothers you by Tweeting @NYTMetro and its editor @carolynryan (a mobilization tactic of Trans Media Advocacy, which released a statement for which Cisnormativity’s Patience Newbury contributed). Then let the anger and frustration go becuase your energies are needed elsewhere. I urge you to continue creating our living history as trans women: Write about your struggles, write about what makes you click and what makes you uniquely you. The New York Times and other media outlets do not own our narrative; we do.

Don’t stop expressing yourself and never fail to fully express who we truly are. They do not own us and we are not puppets in their summer minstrel show.