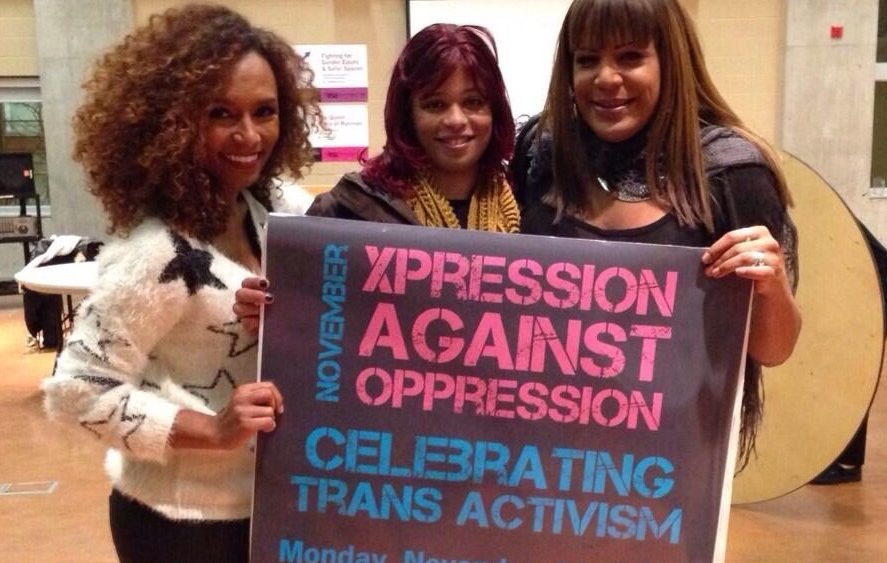 Quiet Reflections: Why I Chose Silence on Trans Day of Remembrance

I chose silence on November 20, also known as Transgender Day of Remembrance, a day when “we mourn our losses and we honor our precious dead.”

I chose silence on November 20 because I face exile, trauma, and threats of violence daily.

I chose silence on November 20 because I have mourned women I knew and women I did not know throughout the year.

I chose silence on November 20 because on this one day the world spoke names of fallen siblings they did not know, share space with and care after in life.

Today, I am refreshed after three days of quiet reflection, and I am ready to use my voice again.

On November 18, I was in Toronto at Ryerson Students’ Union sharing space on a panel with two other trans women of color, reina gossett and Monica Forrester. reina and I traveled from our homes in New York City to share space on a panel for the very first time, and it was transformative for the three of us to occupy such space publicly. In our reflection over beers at a dive bar in Toronto, it dawned on reina and I — close comrades and sisters — that we have not been invited in our own country, or our own city, to be on a panel together, to share space and to use our voices together.

Folk in the crowd continually remarked on how “special” it was that the three of us were so visible, together, in that space. I was grateful for their gratitude, but their comments struck an unsettling chord within me. To me, it was not “special” because that sort of gathering of trans women and folk of color reflects my everyday. What appeared “special” to me, even before I entered that space, was that that sort of gathering is not present in most people’s daily lives. Often times the only time our culture recognizes or shifts their focus on trans women of color, specifically, is in relation to violence, trauma and death.

RELATED ESSAY: A Letter to My Sisters at Islan Nettles’ Vigil

Often when I see a trans woman of color in the media, she is being gawked at, misgendered and reduced to victimhood, a sort of martyr we hold up as a voiceless, inactive symbol of our collective oppression and pain, as if that oppression is distributed evenly throughout our communities. I’m struggling to come to grips with this, to find solutions, healing and action.

It is why I chose silence on November 20. The disproportionate levels of violence trans women of color face pains me, and so does the pervasive framing of trans womanhood being directly linked to images of victimhood and tragedy. It hurts that our names are often amplified only when we are dead, gone, inactive.

I realize it’s a state of emergency for trans women and trans feminine folk of color, and I am dedicated to raising awareness to the plight of my sisters and siblings, yet I also know that the intense focus on the publicizing of murder, violence, death and victimhood becomes a self-fulfilling prophecy for the young women I share space with. I’ve borne witness to young women and girls nonchalantly telling me that they’re not going to make it to 30 (a benchmark I just surpassed) so they’re going to “get their life” at all costs. This “get my life” mentality breeds an urgency in my younger sisters, pushing them to live a hard and fast life with little protections and resources, with little care or regard.

I believe that the constant messaging of inevitable violence is chipping away at my sisters and siblings, and in my efforts as a writer and storyteller, I aim to strike a balance and amplify not just our struggles but our triumphs to show that we, poor-raised trans women of color, are active agents in our survival rather than mere inactive objects of exile and extinguish. Often times, it seems we, poor-raised trans women of color, are more valued by this movement in death than we are in life.

An example of this pervasive correlation between trans womanhood and violence is embodied in the fullness of my email inbox throughout the month of November. My inbox was inundated with requests from organizations and organizers soliciting me to write an essay, give an interview, attend a vigil or speak at a college for Trans Day of Remembrance. I am never as popular in February (Black History Month) or March (Women’s History Month, and Trans Day of Visibility), as I am in November.

RELATED ESSAY: A Letter to My 16-Year-Old Self on Trans Day of Remembrance 2011

Frankly, I had zero interest in being on stage speaking about our fallen this year. I had committed to myself in 2012 not to be visible on November 20, 2013 (and beyond), and I kindly kept quiet, choosing to forward the requests in my inbox to a list of brilliant trans women of color whose voices should be amplified.

I admire Trans Day of Remembrance for its collective gathering of grief and reflection. We need more spaces of grief in community, spaces where we set aside and reflect, but my fear with this highly visible day is that folks — white, trans and/or cis — assume that trans women from low-income and communities of color do not grieve our sisters daily while also existing under the elusive threat that we, too, may be next.

It was these women, who live with this looming threat of violence daily, whom I dedicated my Anti-Violence Project Courage Award in September. They are the courageous, the brave ones, “the ones who have the audacity to be seen in a society that tells them that their existence does not matter.”

Please use the comments section below to share the names and work of trans women of color you know. You can tweet this post using the hashtag #TWoC