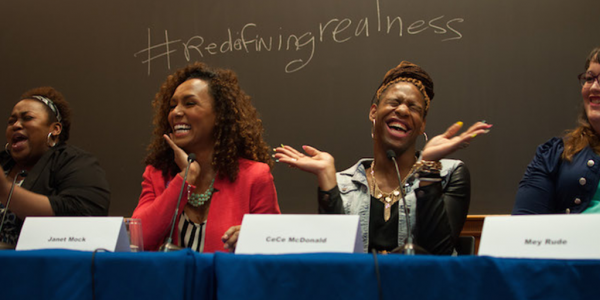 Because of You: My Letter to CeCe McDonald on Her Release

I’ve started and stopped many letters to you, never knowing what to say. I sent books, instead. Books you requested, books that could probably impart more joy and wisdom and strength than I ever could. What exactly does one write to a woman who has influenced them during such a pivotal shift in their life?

I could never find the words.

Now, I wake to the news that your body has left the confines of that prison. The one that has housed you for the past year and a half. Activist and community members around the world have chanted, “FREE CECE.” But I know you have been free this entire time.

No one could take that from you. Your narrative alone, in your own words, with your own beauty and power and love and graciousness, showed me that I did not need to fight for your freedom.

Your life was yours. Your body was held captive. But you were always free.

When I found myself crying over the overwhelming injustice of that incident and your proceeding incarceration, I was just beginning to tell my own story publicly. I was frightened, girl. I didn’t know exactly what I was doing and where I was going and what I truly wanted to say. All I knew was that I had a story and I had seen no one who looked like me – who was brown and trans and grew up poor and a woman – out there telling our stories.

At the time, the doors were being opened to me, from all kinds of folk, and I accepted many invitations. Yet, I soon realized something was amiss, as I’ve written: “The people at the table often did not reflect me or my community. These spaces and the conversations were dominated by men, specifically upper-middle-class white cis gay men. Women, people of color, trans folks and especially folks who carried multiple identities were all but absent.”

I was invited because I was deemed acceptable and appropriate. My sisters — the ones who I grew up with on the streets of Honolulu, the ones who were living their lives in men’s prisons, the ones who were serving face and body as a means of survival — they didn’t get an invitation. And, as foremother Sylvia Rivera said, “I will no longer put up with this shit.”

This was my political awakening, and you gave me the strength to gracefully reject all RSVPs, and eventually they stopped coming anyway because I was no longer “safe,” meaning I talked about race and class and intersectionality too much, I called people out on their well-meaning campaigns, campaigns that were about us but didn’t involve us…and just as I was scared that I was doing something wrong, you wrote me.

I was in Portland, Oregon when I read that piece, just reading it like I had read all your others. I was there to give my first address on Trans Day of Remembrance, a day where we overwhelmingly as a movement pause to speak the names of mostly trans women of color. Frankly, I didn’t want to be in Portland, to be away from my community in New York, to be speaking about the obvious tragedy of death when the daily tragedies of our lives of exile and rejection are rarely spoken and addressed.

I was frankly feeling like a fraud, a puppet for hire to speak about this for a price in front of a mostly white audience all alone. And then I saw my name in your piece, and I couldn’t stop crying: “Thank you for being such a strong, successful, positive (trans) women…Much love to you lady! xo”

It was all the affirmation I needed because if CeCe McDonald knew my name, I was doing something right. When I took that stage that night, I spoke exactly what was in my heart and on my mind. I spoke about the trans community and the LGBT movement and how it hurt me that the names of trans women of color, our names, were often amplified only when we are dead, gone, inactive, and I cried on that stage mentioning you because you gave me an offering of sisterhood, recognition and solidarity that I don’t think I’ll ever be able to repay you for.

Because of you, CeCe, I have a living portrait of resilience, beauty and power.

Because of you, CeCe, I know what injustice in our culture looks like.

Because of you, CeCe, I know that some bodies matter more than others despite our country’s spiel that all are equal. I know that when some bodies fight back those bodies are locked away for daring to survive.

Because of you, CeCe, I know that there are others, and like Angela Davis before you, your story is an example of the injustice of our culture of incarceration, racism, misogyny, and much more.

Because of you, CeCe, I know our lives are worth fighting for.

As hard as I stan for Beyoncé and Zora Neale Hurston and Clair Huxtable, I stan equally as hard for you. Like them and our foremothers, no one can hold a light to your brilliance. Thank you for existing, resisting and conquering.

P.S. For a narrative of CeCe’s incarceration in her own words read her blog. Support the Laverne Cox and Jacqueline Gares documentary on CeCe here.

You can also send messages of what CeCe has taught you using the hashtag #BecauseofCeCe.