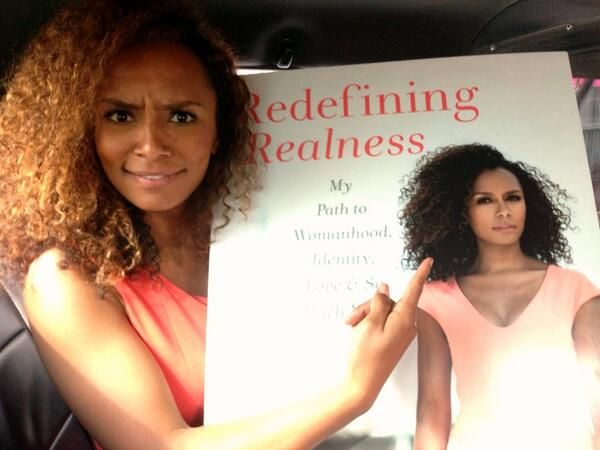 It didn’t hit me that I actually wrote a book until a hardcover copy finally came in. That was about three weeks ago.

Though I wrote the book, went through the editing process, posed for the cover with my beloved behind the camera, there was still a part of me that felt like it wouldn’t really happen, that someone would actually say, “hey girl, this is not working for us. we’ve changed our minds and we’re going to shelve this project.”

For so long I believed that good things could not happen to me, that my dreams and goals and desires and fantasies could not come true. This is how I’ve navigated the world for so long, with feelings of doom, of inadequacy and pain, of letdowns and failed expectations following me. As I write in Redefining Realness, “Happiness was fleeting and accidental; goodness wasn’t in the cards for a girl like me.” I wish I was at some elevated space with myself where I could say I’ve conquered those feelings, but I have not. And this book is not going to fill that craving.

The storysharing process has been interesting. The more you open up, the more you must protect yourself, from others’ gaze and curiosity and investigation and ill-intentions, yet at the same time it cracks you open and makes you realize that when you open yourself up to the world, you find your people, you find inspiration, you find resonant stories. This is what has helped me fill that craving a bit, knowing that there are other people out there feeling, doing, living, loving, struggling, thriving…all yearning to be heard.

Growing up, the library was my refuge. It was the first place that I interacted with books, where they were accessible and free to me. I often tell the story of when I snuck Terry McMillan’s Waiting To Exhale home and how those women characters she created made me laugh and cry and gasp and snap. They reflected me, showed me myself, and gave me license to dream of a possible world where I could be myself and seek love and affirmation. Reading that book and many others in that library, in a lower-middle class neighborhood, gave me license to proclaim my dreams as a young person: I want to be myself; live in New York City; and be a writer. Someday.

And that day has come, and I am trying my best to be present in this day, to be here, really here, to acknowledge the feat that this young, poverty-raised, first generation college educated, former sex worker, pop culture obsessed, big hair-swaying trans woman of color has pulled off. Redefining Realness is here y’all. It’s here. No one is taking it away. It is mine. It is also yours.

What Redefining Realness has done for me is allow me to stake my claim and take up the space in this world that I deserve. We all deserve this space. A space of our own where we can tell our stories and declare our truths. It’s part of the reason why I launched the I AM #RedefiningRealness storysharing project. I feel I can now, with this book — the record of my life thus far — leading the way for me, exist firmly in the messiness of my past and the sort of brilliance of my present and marvel at what is to come. 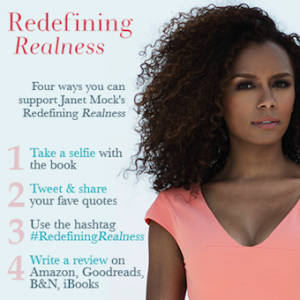 I hope you will share this momentous day with me by submitting your reviews to Amazon, Barnes & Noble, iBooks or Goodreads; Tweeting your favorite quotes as you read; and taking a selfie with the book using the hashtag #RedefiningRealness.