Why I Asked Alicia Menendez About Her Vagina & Other Invasive Questions

I initially said, “No,” when Alicia Menendez reached out to me on Twitter about her “great idea.” Alicia’s pitch involved me asking her the invasive questions I’m asked by TV producers, journalists and on-camera hosts for a segment on her Fusion show, AM Tonight.

I said no frankly because I didn’t want anyone to be at the receiving end of such an interrogation of her identity, her experiences and her body. I know all too well the journey of not only revealing yourself publicly, but also having the public’s gaze on your body. I know women, specifically those of color, whether they are cis or trans, are battling the public’s dissection of their bodies and their validity as “real” women daily in our racist, misogynistic, and gender-policing culture.

So no, I did not want to play the role of oppressor, putting another woman of color on display for dissection, but Alicia assured me that our demonstration would be a teaching moment — and I am glad she persuaded me otherwise. Our demonstration has since gone viral, becoming a catalyst for conversations about how we all interrogate trans identities and how this desire to pull apart trans people’s bodies in media — for the vain purpose of assuaging curiosity or bridging gaps of understanding — must end.

I hope our demonstration pushes us to interrupt this longstanding conversation in the media about trans people. My intent is that we truly transform the media’s framing of trans people’s lives and push producers of content to begin engaging in discourse not so much about what a trans body looks or feels like or how it’s transformed and evolved but rather why it’s unsafe to live in a body that is trans. 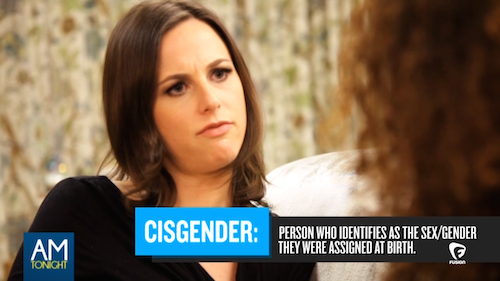 In our segment, Alicia and I flipped the script, with me acting as the interviewer and Alicia acting as the subject. I opened our conversation — or what is actually a barrage of uncomfortable, invasive questions — with my most frequently asked question. It’s the go-to question cisgender folks often ask upon meeting me. It was actually the same comment Piers Morgan led our first interview with — a question I have become adept at pivoting away from: “The amazing thing about you is if I were to look at you, I would have never known that you weren’t trans.” 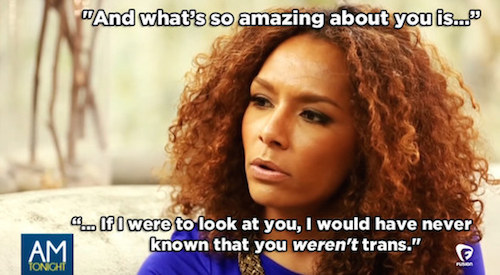 This question is so commonplace that I, myself, have become desensitized to it — the way that marginalized people become accustomed to expect microaggressions to be part of your daily life. It’s just a part of your experience and if you spend your time calling out every cis person who is stunned to learn you are trans, you would have no time to eat — no less wake up in the morning. It’s part of the reason why I, in my interview with Morgan, chose to pivot away from his line of questioning to get through the interview rather than call him out on-air. As we saw it play out, I saved that for the following night’s debate.

I used that particular experience and many other personal and public instances to frame my exchange with Alicia. What was going through my mind as I interviewed Alicia was I needed her to prove to me and my hypothetical viewers her validity as a woman. My job was to interrogate her with questions about her body and her identity so that I could enlighten and educate my viewers, assuaging their curiosities and fulfilling their fantasies about cisgender people, ensuring at the end of our interview that she had proven her womanhood to me and my audience. In my mind, I was doing a public service by stripping Alicia of her humanity and asking her — without a trace of irony or common decency — questions that I myself would never ask another person. These questions included:

“Do you have a vagina?”
“Did you feel like a girl?”
“When was the moment you first felt your breasts budding?”
“Do you use tampons?”
“Who was the first person you told that you were cis?”
“What is the one thing viewers need to know about cis people?”

Alicia literally dodged the questions at the end of our interview. You see her transform from confident interviewer and host to a cowering young woman, protecting her body from my line of questions. This is what happens when we dehumanize and other individuals. We strip them of agency, we put them on display, we ask them to speak on behalf of whole communities, we tokenize them, as Alicia pointed out. She even mentioned that although she rehearsed some of the questions I asked her for our segment, it was an entirely different lived experience to actually occupy that space at the receiving end.

“When I was coming into this I thought we needed to know [the answers to those questions] as a way of bridging an understanding gap,” Alicia said. “But when you have the questions turned on you, I understand how much more intimate those questions feel.”

As illustrated, this experience was beyond uncomfortable — and we were only involved in a mock interview (pun intended) — but I hope our demonstration sheds light on the ongoing, longstanding problem in our media culture of inquisition when it comes to framing trans people’s stories. I also hope it serves as a teaching moment for us all about self-determination and self-definition, about what remains public and what’s private, about practicing agency to say, “No I will not answer your question,” about where our own boundaries lie, and about the fact that we are all valid, real and should never be subject to anyone’s interrogation into our lives, bodies and identities.

You can watch the full interview about my book Redefining Realness at Fusion, where I discuss my coming-of-age, my experiences with sex work and the power of telling our own stories.