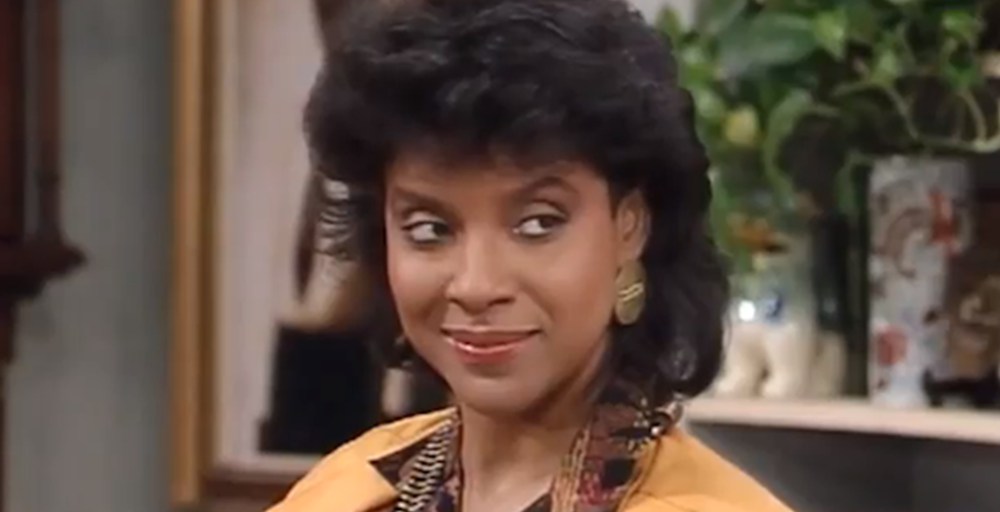 In the second grade, all I thought I could aspire to was being a secretary. Not that there is anything wrong with being an administrative assistant but there was something wrong with a child’s aspirations being limited so early on. This occupation was so engrained in my consciousness as a young black feminine child that I even announced my future career choice to my entire class in 1990. It would take a few years before the influence of one TV heroine radically shifted my image of black women and myself.

This woman was an attorney, a mother of five, a fly fashion plate, a slayer of ignorance, and the most eloquent speech giver in TV history (take that Sorkin!). She even spoke Spanish — especially when angry. Her name was Clair Huxtable. She was passionate and compassionate, she was quick to correct and eager to rebut and never afraid to fight. But she was never, ever “benign,” as described in a controversial New York Times article by television critic Alessandra Stanley.

Stanley’s article, which has spawned thousands of tweets and hundreds of think pieces, was so basic, racist and incorrect that it boastfully declared that one of TV’s most successful female showrunners, Shonda Rhimes, should title her autobiography “How to Get Away With Being an Angry Black Woman.” When I read that lede, I side-eyed so hard that Phylicia Rashād would snap her fingers in high praise. In defense of her piece, Stanley said, “I so often write arch, provocative ledes that are then undercut or mitigated by the paragraphs that follow…Regrettably, this stereotype is still too incendiary to raise even in arguing that Ms. Rhimes had killed it once and for all.”

Despite her intent, Stanley’s outcome distills Shonda’s groundbreaking, glass-ceiling-shattering TV career and frames it with one of the most tired tropes that has been used historically to dismiss black women: She’s an “Angry Black Woman.” Stanley writes:

“Ms. Rhimes has embraced the trite but persistent caricature of the Angry Black Woman, recast it in her own image and made it enviable. She has almost single-handedly trampled a taboo even Michelle Obama couldn’t break…[Her heroines] certainly are not as benign and reassuring as Clair Huxtable, the serene, elegant wife, mother and dedicated lawyer on The Cosby Show.”

Stanley believes she’s complimenting Rhimes here, crediting her as reclaiming this harmful trope and making it appealing must-watch TV. Beyond that, there are so many things wrong with this paragraph:
1. She calls every black woman character of Shonda’s creation an “Angry Black Woman.”
2. She assumes that every fictional black female character is “wrought in [Shonda’s] image” — whereas, Shonda has previously said the character most like her is Grey’s Anatomy‘s Cristina Yang — who is not black, but Asian.
3. While backhandedly complimenting Shonda for trampling this caricature, she frames the First Lady of the United States an “Angry Black Woman,” bringing us right by to 2008 and that New Yorker Cover.
4. She erases Shonda’s entire pre-Olivia Pope career. Two of Shonda’s first leading ladies were actually white women (Grey’s Anatomy‘s Meredith Grey and Private Practice‘s Addison Montgomery) who like most people expressed anger. When these women get heated — like Olivia, like Dr. Bailey, like Annalise Keating (Viola Davis’ character on How To Get Away With Murder — are they not angry too?
5. She wrongfully characterizes Clair Huxtable as “benign,” setting up a binary between easy-to-dismiss, unreliable Angry Black Women and reasonable, likable Benign & Reassuring Black Women.

Rightfully, many have come to Shonda’s defense — including the actors who work for her as well as the bawse herself — but not many have come to the defense of Clair Huxtable. It was one of the first critiques I had of Stanley’s piece, prompting me to tweet: “In what world was Clair Huxtable “benign & reassuring”? She’d slay you w/ pedantic arguments if boxed in.”

In what world was Clair Huxtable “benign & reassuring”? She’d slay you w/ pedantic arguments if boxed in. http://t.co/7X6prqzAKy #feminist

Frankly, the mischaracterization of the glorious Mrs. Huxtable as “benign” and “reassuring” turned me into an angry black woman. One of Clair’s most admirable qualities — something I took notice as a child growing up in the early ’90s — was that she never bit her tongue. Her ability to express her frustration with the world and slay anyone in an argument, including her husband, her children and any person who disagreed with her views of the world, was aspirational. And seeing this vocal and sharp portrayal of a black woman and TV mother on primetime was revolutionary.

Has Stanley ever seen an episode of The Cosby Show? If not, I offer her this clip which taught me — in elementary school — about sexism and the expectations gender roles. In it, Clair offers Sondra’s boyfriend Elvin a cup of coffee, which startles Elvin, prompting this legendary takedown:

Elvin: I’m sorry, Mrs. Huxtable, I didn’t think you did that kind of thing.
Clair: What kind of thing?
Elvin: You know… serve.
Clair: Serve whom?
Elvin: Serve him. [referring to Cliff]
Clair: Oh, serve him. As in “serve your man”?
Elvin: Well, yeah.
Clair: Let me tell you something, Elvin. You see, I am not “serving” Dr. Huxtable, okay?
Elvin: Okay.
Clair: That’s the kind of thing that goes on in a restaurant. Now I am going to bring him a cup of coffee just like he brought me a cup of coffee this morning. And that, young man, is what marriage is made of: it is give-and-take fifty-fifty. And if you don’t get it together, and drop these macho attitudes, you are never gonna have anybody bringing you anything anywhere any place any time EVER. [Clair pauses, then smiles] Now, what would you like in your coffee?
Elvin: Maybe I can get *you* some coffee.
Clair: Elvin, that’s alright. I don’t mind getting it. But thanks for offering.

It was moments like this that led Slate to call Clair Huxtable “one of TV’s great feminists” in celebration of The Cosby Show‘s 30-year anniversary on Saturday. Jason Bailey wrote, “Clair Huxtable was an ideal to strive for. Why would you not want to be—or be with—a proud, brilliant woman who was both a mother and a professional?” The sitcom ran for eight seasons on NBC and held its standing as the No. 1 show for five of those years. Though Phylicia Rashād never took home an Emmy for her incomparable portrayal of Clair Huxtable, she goes down in TV history as one of its most dynamic TV moms, helping shape the way women are written in pop culture. The show as a whole flipped the script on race as well, being credited as “quietly challenging racism by normalizing the Huxtables’ blackness,” according to Melissa Harris-Perry who discussed the series on her show Sunday.

It was Harris-Perry, in Sister Citizen, who broke down the ways in which black women existing at the intersection of race and gender — like Shonda Rhimes, like Olivia Pope, like Clair Huxtable — navigate the world through “the crooked room”. She writes, “When they confront race and gender stereotypes, black women are standing in a crooked room, and they have to figure out which was is up. Bombarded with warped images of their humanity, some black women tilt and bend themselves to fit the distortion.”

Frankly, Stanley’s article, which upholds this tired stereotype, makes great effort at dismissing Shonda Rhimes’ feat of centering black women, intimidating women, flawed and complex women in her body of work, ultimately making it much more difficult for Rhimes to stand up straight in a crooked room that’s doing its best to further slant and twist her image and work.

More than all women, black women are rarely afforded space to express anger. When we are wronged and express our anger, we are dealt with and punished for expressing our frustrations. One of my most infamous media moments happened in February when I expressed my anger about an interview that I felt was shallow, sensational, and unpreparedly done. When I rallied the courage to rebut the way the interview was framed once aired, I was told I would be “dealt with on-air.” When I actually chose to defend myself on live television, I was widely dismissed as an Angry Black Woman by many viewers who felt I was “ungrateful” and “undeserving” of such a mainstream platform. One letter went as far as characterizing me as a “finger-waving, hand-clapping bitch who just set my cause back decades.” It was that moment that taught me as never before that no matter how successful I am, no matter how articulate, no matter what I accomplish or acquire, that when I do not uphold the standards of respectability, I will be checked, punished and dismissed as an Angry Black Woman.

There is much for us to be angry about. We are navigating systems that are not built for us. Our bodies are often not offered resources or care. We are erased from spaces, conversations and movements. And even our successes are often dismissed as trends or oddities, widely belittled with the publishing of a single article. But like Clair in that episode where she’s on a TV panel with three white men, I define and declare myself, I get to say who I am and what I bring to any table.

Clair was not “benign” or “reassuring” — she was exacting, confrontational, eloquent, fly, righteous, intimidating, and yes, angry.

ps: I offer you a tribute to a young black woman visible in pop culture who refuses to be “benign and reassuring” or settle for “pickle juice.”