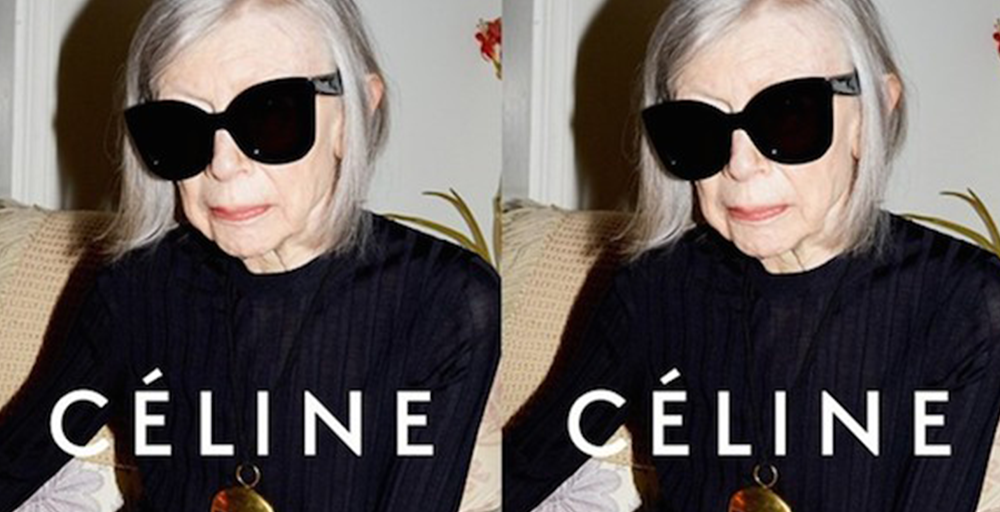 Why Joan Didion In Celine Matters For Old & Young Women

Every Friday I cover all things culture on my new MSNBC series, So POPular! The weekly show is my attempt at using art and movies, books and celebrities, as a lens to discuss where we are politically and culturally. So POPular! challenges our ideas on what’s considered political and worthy of analysis.

I end every show with an editorial on one pressing and personal cultural topic.This week’s editorial centers on legendary writer Joan Didion and her ad campaign for Celine.
Watch the segment and read the transcript below.

That was a clip of President Obama presenting Joan Didion with the National Medal of Arts in 2012. Didion was one of the first writers I fell in love with on and off the page. She wrote prose and reported on cultural matters that truly moved and influenced me. As a features writer for my college paper in Hawaii, I held Didion as the standard to which I hoped to aspire.

Her words never failed to make me feel and think more deeply about why I am here. She began her essay collection “The White Album” with a pivotal line that anchored my writing: “We tell ourselves stories in order to live.” And my girl crush on Didion went beyond the page. Soon, I found myself devouring images of the writer online.

One of my favorite photos of Didion captures her in a long-sleeved dress and sandals while standing in front of her Corvette. Yes, she had a CORVETTE! She embodied effortless cool. This petite intellectual was not intimidated by aesthetics, and she still isn’t.

This week, the 80-year-old starred in a new ad campaign for the fashion brand Celine. Wearing her signature oversized shades, Didion sits in an all-black ensemble accessorized with a single gold pendant necklace. She is not posing, she is merely being – a writer, an intellectual, a woman, a widow, a hard-to-ignore Octogenarian.

Fashion is an industry that has more often than not told women that they do not matter and that they do not deserve to be seen because of their size, their skin color, and/or their age. Our youth-obsessed culture has deemed older women invisible. But Didion refuses to be tucked away on our bookshelves. She takes center stage as a face of a major fashion company, bringing her six decades of work, from Slouching Towards Bethlehem and Play it As It Lays to The Year of Magical Thinking, along with her.

Didion’s ad campaign reminds me of images of the late Maya Angelou laughing for Cole Haan and Advanced Style muse Jacquie Tajah Murdock serving it to lovers of Lanvin.

It’s affirming for me as a young woman to see the possibilities of my future through the images of these women who have truly lived. Our elders should not go slowly into the dark, they should bask in their brilliance.