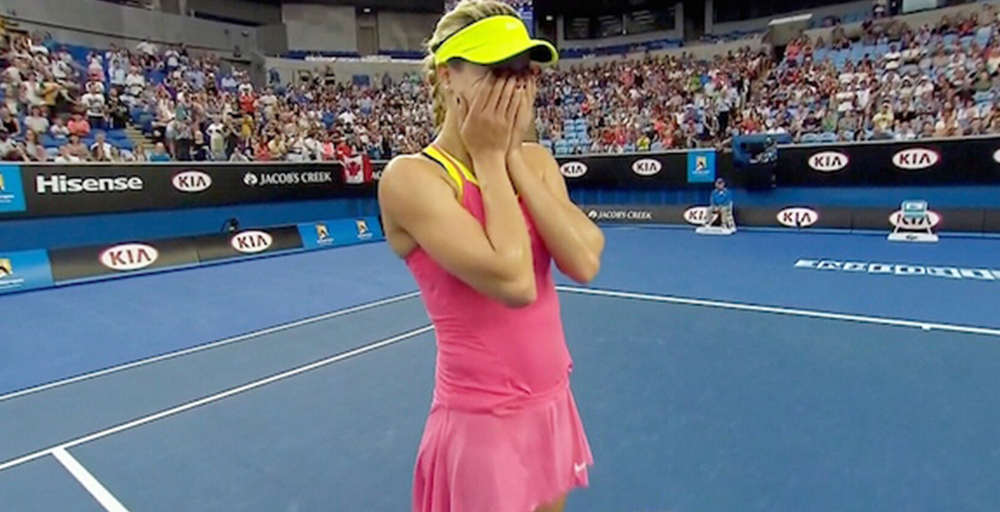 Every Friday I cover culture on my new MSNBC series, So POPular! The weekly show is my attempt at using art and movies, books and celebrities, as a lens to discuss where we are politically and culturally. So POPular! challenges our ideas on what’s considered political and worthy of analysis.

I end every show with an editorial on one pressing and personal cultural topic. This week’s editorial uses a sexist moment on the tennis court with athlete Eugenie Bouchard to discuss objectification on and off the court. Watch the segment and read the transcript below.

Yesterday, I was prepping for todays’ editorial, and I didn’t know what topic I wanted to tackle so I turned to Twitter where I get all of the answers. @CelesTiatem tweeted me:

“What about the recent thing with Eugenie Bouchard and the reporter who asked her to twirl?”

Being that I am not a tennis fan – beyond the goings-on of Venus and Serena Williams – I didn’t know about twirl-gate.

Also know as that time when a male presenter requested that tennis player Eugenie Bouchard twirl for him after winning the second round of the Australian Open on Wednesday.

(Video clip)
ANNOUNCER: [Serena Williams] was kind enough to give us a twirl. Can you give us a twirl and tell us about your outfit?”
BOUCHARD: A twirl?
ANNOUNCER: A twirl, a pirouette. Here we go!
(Bouchard twirls. Crowd applauses, whistles and howls)
BOUCHARD: I have to say I honestly think Serena’s outfit is the best. Even better than mine. I’m going to give her that.

I agree that Serena Williams is a winner. She kills it on the court – both style wise and skill-wise. But Bouchard later admitted that she wasn’t too thrilled about being asked to twirl in pirouette fashion.

“It was very unexpected,” she said. “I don’t know, an old guy asking you to twirl. It was funny.”

Frankly, I didn’t find it funny. It found it cringe-worthy.

A man requesting that a female professional “give us a twirl” in front of a crowd was demeaning. Bouchard’s reluctant twirl was met with hoots, hollers and whistles reminiscent of catcalls. Her twirl didn’t only put her outfit on display.

We can assume that no male tennis player has ever been asked to twirl and show off his Ralph Lauren polo shirt. It’s because historically women have not been framed by what they do but by how pleasing they are to the public’s gaze.

Objectification is the act of viewing or treating a person as an object. When that reporter requests that Bouchard twirls, she’s denied agency. The crowd’s whistles and howls confirm that winning isn’t enough – she must also be pleasing and desirable.

That moment, as Bouchard twirls, she is viewed primarily through the lens of her sexual appeal, rather than her achievements as the No. 7 ranked women’s tennis player in the world.

And Bouchard is not alone here. Serena Williams also revealed that she faced a similar request. She said, “A commentator asked me to twirl. I wouldn’t ask Rafa (Nadal) or Roger (Federer) to twirl. Whether it’s sexist or not, I don’t know. I can’t answer that. I didn’t really want to twirl because I was just like, you know, I don’t need all the extra attention.”

And Williams doesn’t need that extra attention because she’s a record-breaking force, a dominating figure in her sport, and that is enough. If she wants to twirl after a win, she will. If she wants to serve us aesthetics while kicking ass on the court, she will.

As Williams stated of her on-court style: “This year we really wanted to bring out a powerful woman and a strong woman…You can be beautiful and powerful at the same time.”

Indeed, Williams and Bouchard are both beautiful and powerful, and what they wear on the court is for their pleasure – not ours, and definitely not a male announcers.

To twirl or not to twirl? That should definitely not be a post-match question.