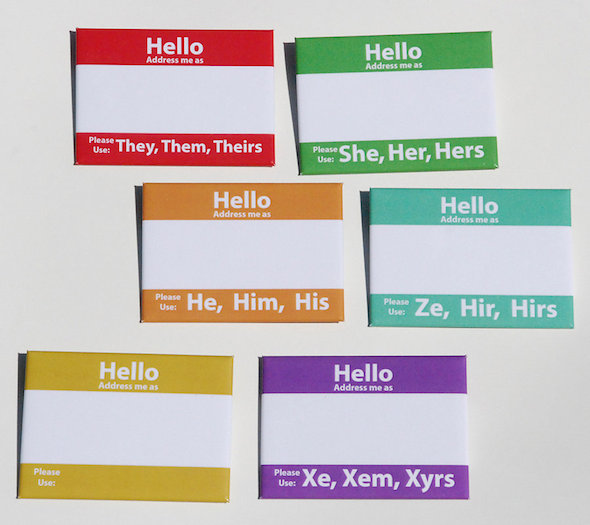 Expanding Pronouns: Jenner, the Media & a Case for Using ‘They’

Every Friday I cover culture on my new MSNBC series, So POPular! The weekly show is my attempt at using art and movies, books and celebrities, as a lens to discuss where we are politically and culturally. So POPular! challenges our ideas on what’s considered political and worthy of analysis.

I end every show with an editorial on one pressing and personal cultural topic. This week’s editorial critiques the media’s use of pronouns when discussing Bruce Jenner‘s reported transition to womanhood. You can watch the clip and read the transcript below:

This week, the news of Olympic gold medalist Bruce Jenner’s transition dominated pop culture. All of media is obsessed with telling the story of a person who has not stepped forward to tell their own story.

The New York Times dedicated two stories to Jenner’s gender identity, one with the title, “The Transition of Bruce Jenner: A Shock to Some, Visible to All,” while PEOPLE boldly stated on its cover, “Transitioning from Male to Female…He Is Finally Happy.”

Don’t be fooled by these headlines: Jenner still has not uttered a word. Instead, the media is creating the record of Jenner’s story, stripping the reality star of the opportunity to offer us vital information about their identity.

With coverage in reliable outlets like the Times and PEOPLE – Jenner’s gender identity is no longer speculation. Jenner is, in fact, trans, according to family members who have emerged as go-to sources in the Jenner saga. But these family members who are so adamant about speaking on and off record about Jenner’s transition into womanhood – still use the pronoun “he” when talking about Jenner.

In this week’s PEOPLE, the magazine states:

“Since his family currently uses the pronoun “he” to refer to Jenner, PEOPLE is doing the same…Jenner did not respond to a request for comment on this story or for a preferred pronoun.”

This is beyond problematic for so many reasons. Any trans person navigating identity, community and especially family could explain that when it comes to revealing your identity to loved ones – family members will likely be slow, resistant or even hostile to making name and pronoun changes.

So, a journalist could surmise that family members are likely not going to be the most reliable sources of information, specifically around pronoun usage, and as seen in the PEOPLE story, the magazine by relying on family member’s use of masculine pronouns helps spread harmful misinformation about Jenner and all trans people.

Dropping a “he” or “him” doesn’t typically get a second thought in everyday conversation, but it’s time we evolve our pronoun usage.

A Preferred Gender Pronoun – or PGP — is the pronoun or set of pronouns an individual expects others to use when talking to or about them. I, me, he, she, you, and they are just some pronouns we use daily, and most of them are gendered.

Pronouns may not seem like a big deal but to trans people, they are yet another minefield to navigate in our gender-binary obsessed culture which is obsessed with labeling and making assumptions about identity. If you are unsure about what pronoun to use, common practice is to either: Ask, or default to the gender neutral “they.”

“They” has become an increasingly popular substitute for “he” or “she”.
What I don’t understand about the Jenner story is this: The media is making every effort to proclaim that Jenner is living as a woman, yet the media refuses to call Jenner “she” or even “they.”

If we’re going to report on Jenner’s identity as a woman, we should be vigilant in ensuring we use gender-inclusive language, starting with “they” until Jenner – the only source that actually matters – tells us otherwise.