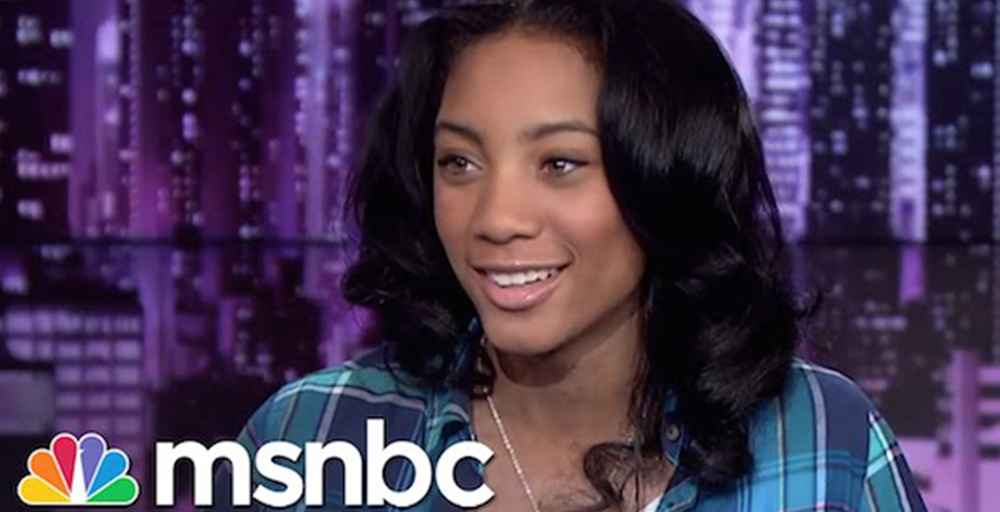 I end every show with an editorial on one pressing and personal cultural topic. This week’s editorial discusses Little League star Mo’Ne Davis and the racialized sexism she faced while being called a slut by a college baseball player online. Watch the segment and read the transcript below.

Welcome back to So POPular! I’m Janet Mock, here now to discuss one of our generation’s most winningest girls in the world: the one and only Mo’Ne Davis.

The Little League World Series star is only 13 and has already graced the cover of Sports Illustrated, wrote an autobiography, designed her own sneaker line for a good cause, and will be the subject of a Disney Channel biopic.

This week, while promoting her book, Davis sat down with Lawrence O’Donnell on the Last Word on msnbc to discuss the pressure of being the first African American girl to play in the Little League World Series.

Of course, a little girl standing at a mound shouldn’t have to worry about who’s watching her, she shouldn’t have to worry about anything other than throwing a solid pitch. But being carefree isn’t a luxury afforded to girls like Mo’Ne Davis, as evidenced by a vile tweet sent by Joey Casselberry –a Bloomsbury University baseball player – who called the girl wonder a “slut.”Casselberry tweeted: “Disney is making a movie about Mo’ne Davis? WHAT A JOKE. That slut got rocked by Nevada.”

The University swiftly kicked Casselberry off the team for his disparaging comment. Davis didn’t only forgive the baseball player but she also wrote an email to the university to reinstate the man who called her a slut. She told ESPN’s SportsCenter: “Everyone makes mistakes and everyone deserves a second chance. I know right now he’s really hurt and I know how hard he worked to get where he is. I mean, I was pretty hurt on my part but I know he’s hurting even more.”

Now that’s sortsmanship! I applaud Davis for containing such grace against such ignorance but hearing her state that her offender may be “hurting even more” made me ache. So early on, girls of color are taught to be stronger, better, more magnanimous towards a world that is so resistant to their resistance.

Writing for Salon.com, professor Brittany Cooper said, “I wish that Black girls’ lessons in building character and being the “bigger person,” did not have to be learned in a system that requires we gloss over long histories of racialized sexism and sexualized racism in order to do so.”

Because of these systems, winning black girls have often faced heightened hostility in the public eye. We all remember in 2013 when Oscar nominee Quvenzhané Wallis was randomly called the C-Word by The Onion while attending the Academy Awards. She was only 9 years old. We all remember when Serena Williams, at the tender age of 19, faced boos and jeers from a hostile, racist audience at the Indian Wells tournament in 2001.

Williams wrote in TIME magazine of her experience 14 years ago: “The under¬current of racism was painful, confusing and unfair. In a game I loved with all my heart, at one of my most cherished tournaments, I suddenly felt unwelcome, alone and afraid…When I was booed at Indian Wells—by what seemed like the whole world—my voice of doubt became real. I didn’t understand what was going on in that moment. But worse, I had no desire to even win.”

Those boos nearly squashed Williams. And that’s the intent of such ridicule: It’s designed to check and halt women from winning. It’s designed to let them and all us who look on adoringly, who see our best possible selves in their glory, know that we do not belong – no matter how accomplished we are.

But Williams didn’t let the boos halt her. She would go on to become the number one ranked women’s tennis player in the world. As she wrote in TIME, “I have nothing to prove.”

And this month, despite having nothing to prove, Williams returned to that same court, the same courts that adamantly told her she did not belong. Williams’ return to Indian Wells after a 13-year boycott is a winning model of possibility, telling Mo’Ne and every girl yearning to shine, that they are deserving of voice, visibility and all the space their bodies and brilliance can occupy.