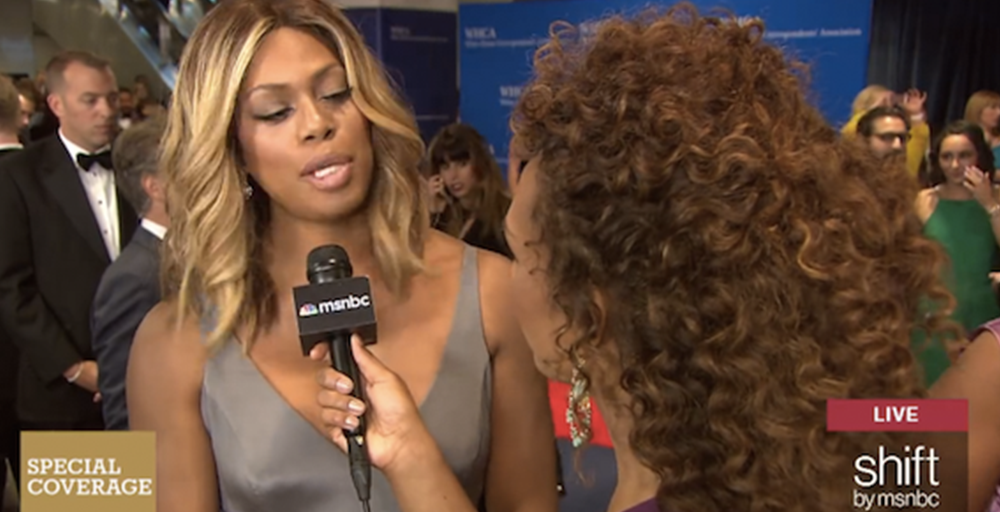 On Saturday, I hosted msnbc’s red carpet coverage of the White House Correspondents Dinner, also known on the interwebs as #NerdProm, and spoke with many of my favorite cultural creators, from Selma director Ava DuVernay and black-ish‘s Kenya Barris to Community‘s Gillian Jacobs. But it was my exclusive interview with actress and advocate Laverne Cox, speaking for the first time about Jenner’s ABC interview with Diane Sawyer that aired Friday night that stole the show.

Here was both our reactions via Twitter while watching live:

Sending lots of love and support to #BruceJenner and their family tonight. It is always brave to stand in one’s truth. Congrats darling.

#BruceJennerABC confirms this truth: No matter our age/path, we’re all searching for authenticity, identity, acceptance & (self-)love.

Watch our interview and read the transcript below (thanks to Xenia Woods on Facebook for transcribing):

JM: This is a gag-worthy moment that I can’t even handle right now. Umm. Obviously this evening – is this your first White House correspondents dinner you’ve been to?

LC: I got in last night, I went to a couple parties, It’s like, I feel like a, sort of, neophyte in D.C., sort of taking in the whole political scene. But it’s pretty awesome.

JM: But political and Hollywood right? Meeting in this interesting…

LC: I know! It’s really interesting. In fact, nerd prom, is I heard what it’s called. Nerd prom. Hashtag nerd prom. I’m so happy to be here! And I’m an Emmy winner! Laverne Cox and the T-Word won a daytime Emmy last night. I’m so proud of all the seven young people who, you know, trusted us to tell their stories on MTV and Logo. Shout out to each and every one of you. I love you. We’re Emmy winners today!

JM: Well, congratulations. That portrait was just so powerful. I was also so grateful to all of the young people for being so open and telling their stories and we know in this climate that our stories and being counted and visible is so vital and important. Last night, we know that ABC special, with Jenner, aired, and they finally told their story. What was your reaction to seeing that portrait?

LC: I think a lot of people tuned in, umm, expecting to see a spectacle and they tuned in and saw a profoundly nuanced, complicated, beautiful human being. I thought ABC handled it really beautifully, and I had spoken to Bruce several months back, and the same person I spoke to on the phone who really just loves their children so much and wants their family to be happy was the person I saw on television last night. Um, I also think it’s important too, to note, um, I spoke to Bruce today and they were really um pleased with the way things um, went last night and um at the end of the day they’re just a family person. But I think it’s important to note that this is just one story; that Bruce’s story is very specific; most trans people don’t have that kind of privilege, don’t have the kind of privilege that I have or you have… at the end of the day, the visibility that I had last year and continue to have didn’t save Blake Brockington from suicide; didn’t save Leela Alcorn from – from suicide, didn’t save the seven trans women who were murdered the first eight weeks of this year. So, visibility matters, but structural change and policy change is really what needs to happen so the lives of all trans people will be better.

JM: What I love about this moment and also just the fact that, um Jenner coming forward and telling their story, is how it shapes and changes hearts and minds, but at the same time I think it does influence the policy, right, so not every person in America has had the “Ellen” moment, right? I feel like the trans community has had its Ellen moment, and the trans community is now, or the people who are not trans are able to now say that they know a trans person because of this iconic hero in our American culture.

LC: Yes, and still a hero, still a hero. What Bruce said to me today is, I was like, this is sort of like another gold medal and they said this is better than a gold medal. And what Bruce really wants to come out of this beyond not being able to transition privately is that people’s lives will be saved and that people will be helped by this. And this is always my hope. And I think that’s when visibility matters, when it can save lives and influence the changes of hearts and minds.

JM: (laughing) I love you too.