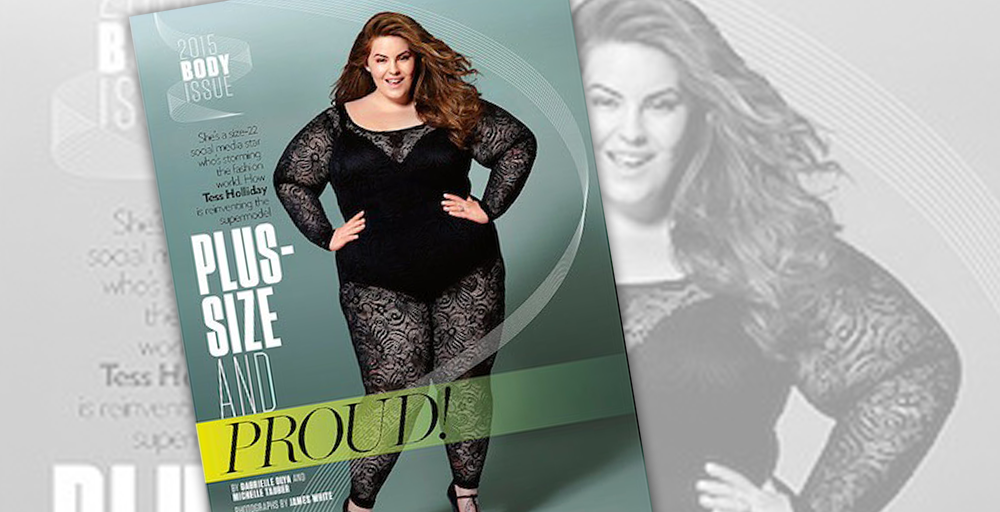 I end every show with an editorial on one pressing and personal cultural topic. This week’s editorial discusses PEOPLE magazine’s annual “Body Issue,” which features plus-size model Tess Holliday on its cover. The cover is a radical and necessary departure for the magazine which usually puts thin celebrities in their bikinis on this special issue. For once, girls with curves or girls who proudly embrace the term fat, have a mirror that reflects their unique beauty in mainstream media.

You can watch the segment above and read the transcript below.

This week, my former colleagues at PEOPLE magazine released their annual Body Issue, which is usually reserved for ripped, super svelte celebs in bikinis. It’s the kind of pre-summer read that’s supposed to inspire us to get into tip-top beach-body shape.

But this year’s cover is a major – and revolutionary – departure. The cover girl is plus-size model and body-love activist Tess Holliday, who proclaims to readers everywhere, “You can be beautiful regardless of your size.”

And the Mississippi-native would know, having gone from being bullied relentlessly because of her body to becoming the first size-22 model to sign with a major agency when she joined MiLK Model Management in January.

There is no bigger media platform than PEOPLE which has never shied away from giving women a platform to speak up about body-shaming. During my tenure there, I recall covers featuring Jessica Simpson, Jennifer Love Hewitt and the infamous 2007 Tyra Banks cover that asked readers the question: “You call this fat?”

But unlike Tyra, Tess Holliday is fat. And she’s gorgeous and proud of her body – and this cover is radical for a number of reasons. One of which is its rarity, as echoed by my Marie Claire colleague Nicolette Mason — who helms the column, “Big Girl in a Skinny World” and shares her plus-size style on her blog.

When I asked Nicolette about Tess’s cover, she told me:

“It’s so rare to see someone with Tess’ body type on a magazine – and even less frequently do we see her body type parallel a positive, uplifting message where’s she’s clearly happy. It’s just Tess, at a size 22, looking fabulous and sharing her message of radical self love. It’s pretty empowering to see someone not just defy standards of what it means to look, be, and feel beautiful – but to also see a young woman who has been able to turn her message into a full blown career!”

And Tess’s body-loving message is summed up with one hashtag: #EffYourBeautyStandards, which she created on Instagram in 2013 to show that beauty comes in all shapes and sizes.

Our culture is engrained with myths that shame, silence and pathologize fat people. We’re told that fat is bad and unhealthy and that weight loss is healthy and worthy of continual praise. We believe these messages because they’re framed as the norm and are totally ubiquitous.

I created So POPular because I yearned to fill in some of the gaps I’ve noticed when it came to representation, particularly in mainstream media. And this cover fills a bountiful gap in representation. In my years as a consumer of culture, I cannot recall ever seeing a woman of Tess’s size celebrated for her unique beauty – and sadly, thousands of women who look like Tess likely have never seen their bodies and beauty celebrated either.

Popular culture is its most powerful when those most marginalized and misunderstood can see reflections of themselves, when they’re celebrated, when they’re framed as the heroes and agents of their own stories and images.

I hope this cover sparks deeper conversations around our need to challenge and redefine beauty and check the ways in which we shame people based on bodily difference. Most importantly, I hope it empowers girls with bountiful bodies to stand just a bit taller and fiercer.