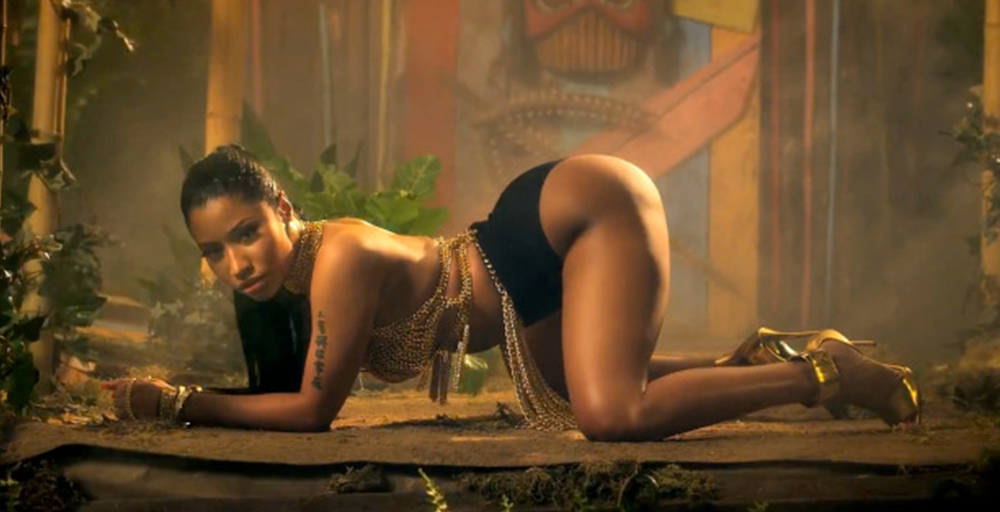 I end every show with an editorial on one pressing and personal cultural topic. This week’s editorial discusses Nicki Minaj’s new Madame Tussauds wax figure which features Minaj on all fours the way people have used it to objectify her. Mock also talks about how black women’s bodies have been objectified throughout history. Watch the clip and read the transcript below:

Earlier this month, Madame Tussauds in Las Vegas unveiled a wax figure of Nicki Minaj showing the rapper on all fours based on a scene from her record breaking music video for “Anaconda.” After its unveiling, Minaj posted a series of images on Instagram where she wrote that she loved the statue and called the display “so iconic.”

Many people – like myself – of course side-eyed Madame Tussaud’s choice to position Minaj’s statue in this particular way. But Tussaud’s defended their figure to Fader, saying:

“We made the decision to celebrate Minaj’s unforgettable pose… because … it resulted as one of the most iconic videos ever produced … As with all people we immortalize in our attractions, her representatives were kept informed every step of the way during the figure-creation process.”

Unfortunately, no matter how iconic that video and no matter how much control Minaj exhibited over her body in the controlled environment of her “Anaconda” shoot – when her body is taken out of context of that controlled space, her body and her likeness become a prop, a stand-in for other people’s desires and sexual fantasies.

Almost immediately, photos of visitors groping the statue’s breasts, and butt and body surfaced online. Before visitors were captured fondling the figure, fellow rapper Azealia Banks, felt some kind of way about the figure, tweeting:

As much as that woman has accomplished, they had to put her on all fours… Why not standing up with a mic in her hand ???

Madame Tussaud’s said in a statement that visitors are “generally respectful towards the wax figures” and that they would now beef up security around the display until “the set is redesigned.” That’s all right and well but Tussaud’s intentionally chose to position Minaj this way, to put her on all fours in full display, knowing right and well that visitors could choose to do what they wanted with the rapper’s likeness.

What I don’t understand is how Tussaud’s – which calls itself an “interactive and immersive” space — did not predict this behavior because historically black women’s bodies have always been framed as public property, mere objects to gawk and fondle.

The treatment of Minaj’s body reminds me of the vulgar snapshots taken by visitors to artist Kara Walker’s sculpture in Brooklyn called, “A Subtlety” which was a 35-foot-tall figure in the shape of a black woman. Visitors fondled the sculpture, they posed with their tongues out and fingers pointing.

And it also reminds me of the way women of color have been used as props in entertainment by everyone from Miley Cyrus and Amy Schumer here to America’s most bankable pop star Taylor Swift. And of course, it reminds me of Sara Baartman, a South African woman who became the most famous black woman in 19th-century Europe because of her body.

She was dubbed The Hottentot Venus on European stages where she performed in the early 1800s, and upon her death, her unburied body parts were put on display at Paris’s National Museum of Natural History for the world to behold. She remained there on display for the public to consume until the 1970s, and wasn’t laid to rest until 2002. So many believed that Baartman’s body belonged to them – long after she was alive to perform for them.

And the Madame Tussaud’s figure is nothing new. It’s embedded deep in our culture.