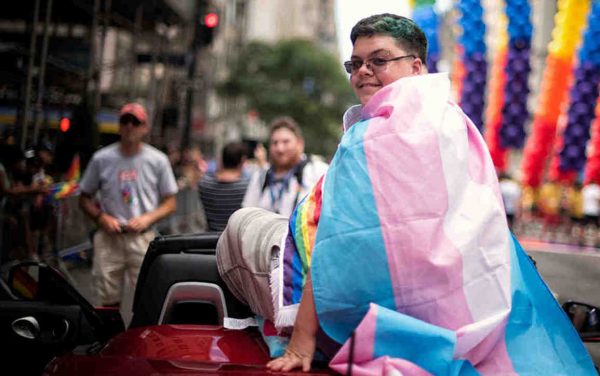 The Bathroom Debate: How the Trump Administration Is Failing Trans Youth

When I was a high school freshman in Honolulu, I would sit with my girlfriends on the bleachers of the school amphitheater every morning. We’d meet in the same spot and chat for an hour, before homeroom began. We’d gossip and giggle, swoon over Justin Timberlake and sip from our coffee cups, which made us feel so adult. It was our version of Central Perk on “Friends.”

I felt like any other student, just one of the girls, until one morning when a vice principal, who had always looked at me curiously, blocked me as I followed my friends into the girls’ restroom. The administrator told me to come with her. We walked to the nurse’s office, a five-minute trip from my homeroom, where she pointed to a single-stall restroom.

I walked into the restroom in silence. The vice principal and the nurse looked on.

I was only 15, and I obediently used that restroom for the rest of the year. I didn’t know then that I had agency and could defend myself from authority figures. I was also used to making compromises so that the adults around me felt comfortable. That was 1998.

Nearly two decades later, President Trump’s administration has rescinded guidelines put in place by the Obama administration that directed schools to allow transgender students to use restrooms that correspond to their gender identity.

But not without a fight. Education Secretary Betsy DeVos was resistant to the retreat on the restroom policy at first. The classical singer Jackie Evancho, who sang the national anthem at Mr. Trump’s inauguration, requested a meeting with the president to discuss transgender rights with her sister Juliet, a trans teenager. Activists protested Wednesday night in front of the White House, alongside Gavin Grimm, a transgender 17-year-old student from Gloucester, Va., whose case for using the boys’ restroom at his high school will be argued by the American Civil Liberties Union at the Supreme Court in March.

By overturning this nondiscrimination protection, the Trump administration claims it’s protecting children — not from bullies or menacing adults, but from their own peers. This infuriates me. I know how messy things can get when adults overstep their boundaries and insert themselves — their politics, their fears, their prejudices, their ignorance — into the lives of young people.

Behind the closed door of the nurse’s office restroom, I cried at the rejection and the embarrassment of being separated from my friends and told I did not belong with them. I arrived at homeroom that morning 15 minutes late with puffy eyes. My friends gave me curious, sympathetic looks. They wanted to know what was up, but I didn’t have an answer for them. It took me weeks to explain to them that I had to use a separate restroom because I was a different kind of girl.

I was in the seventh grade when I first began to identify as trans and express my gender identity as a girl. My social transition began with growing my hair, and wearing clothes and makeup that made me feel like Destiny’s Fourth Child. This shift in my personal aesthetic made me feel good about my body, confident in my appearance and at ease in social settings where my peers were also exploring, changing and growing.

We were all in process — a generation that came of age watching gay people on television, like Wilson Cruz on “My So-Called Life” and Ellen DeGeneres on the sitcom “Ellen.” We were raised with the knowledge that we were not all the same, and that was O.K.

Toward the end of my freshman year, I began my medical transition. Soon after that, I reintroduced myself as Janet to my classmates at a back-to-school assembly. My peers, who voted me into student government the previous semester, applauded.

To say that I loved school would be an understatement. It was my oasis, my sanctuary.

I was our class treasurer, a peer mediator, the captain of the volleyball team and a tuba player in the marching band. I was that eager student who could often be seen running through the halls — from a student council meeting to a newspaper brainstorming session and then to the gym for practice.

But things began to shift after that administrator blocked me from going into the restroom with my girlfriends. I was pulled out of class my sophomore year whenever I wore a skirt, a blouse or a dress — anything that didn’t fit the school’s binary constructions. I was sent home to change a dozen times that year. I was repeatedly called out of my name and by the wrong gender pronoun by school bullies — but most often by the adults charged with creating a safe, welcoming and affirming space for students.

I was a black and Native Hawaiian trans girl from a single-parent home. I was not naïve. I knew that struggle was part of my coming of age, so I wore a smile every day as part of my armor. I didn’t want anyone to see that I was in pain, that I felt like I did not belong and that my body, my clothing, my being was wrong.

Despite my resilience, I nearly did not make it past my sophomore year. I would go home at night and contemplate never coming back. The struggle of waking, getting dressed, walking to school and being met with hostility each day took a toll on me.

Thirty percent of transgender youth report a history of at least one suicide attempt, according to a study published last year, and nearly 42 percent have injured themselves. I know firsthand how vital it is for young people — for all of us, actually — to be met with nods, applause and open doors. It’s even more urgent for marginalized students, regardless of their ability, race, class, immigration status, religion, sexual orientation, and gender expression and identities.

Eventually, with my mother’s help, I transferred to a school in my junior year that offered me the support I needed, where the adults were actually advocates for me. I was growing comfortable in my own skin while discovering what I loved, what I wanted to do, who I wanted to be and what I felt I could do. I was given equal access to facilities and called by my name. I graduated with an academic scholarship to college.

My teachers invested their time in me, and their belief in me enabled me to become the first in my family to go to college. I went on to attend graduate school at New York University, work for People magazine, produce and host path-clearing television projects, high-five Oprah Winfrey on national television, take the stage at the Women’s March on Washington and write two books about my experience.

Young people overwhelmingly get it. It’s adults like those in the Trump administration who don’t realize that pitting young people against one another has consequences. It encourages some to be bullies and turns others into sinister objects.

These ridiculous wedge topics are a waste of our time and our resources. We’re talking about restrooms here — people should be able to do their business in peace.

When trans students are told that they cannot use public facilities, it doesn’t only block them from the toilet — it also blocks them from public life. It tells them with every sneer, every blocked door, that we do not want to see them, that they should go hide and that ultimately they do not belong. When schools become hostile environments, students cannot turn to them. Instead they are pushed out. And without an education, it makes it that much more difficult to find a job, support themselves and survive.

That is the situation the Trump administration is creating. Despite the culture of fear, ignorance and intolerance that permeates our country right now, I am here to tell each and every student that you belong, and that nothing — absolutely nothing — is wrong with you.

This was originally published in the New York Times.