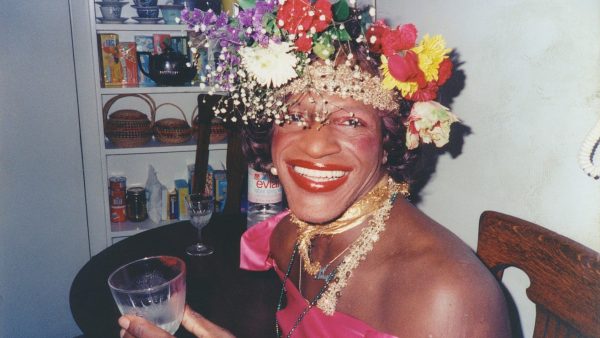 How Tourmaline Introduced a Generation to Marsha P. Johnson

The Internet has introduced me to some of my closest friends. It was through my hashtag #girlslikeus where I connected with other trans women on Twitter and Tumblr. We had challenging conversations, courageous personal revelations, and shared insights and experiences, and just had fun. The hashtag tethered me to many women in my community in impactful, lasting ways. It was on Tumblr where I first crossed paths with trans activist Tourmaline and her blog, The Spirit Was…, in 2012.

At the time, Tourmaline worked at the Sylvia Rivera Law Project in New York City, while updating her Tumblr was her unpaid, part-time job. Hers had the familiar elements of most Tumblrs — personal musings, GIFs, signal boosts — but it also featured something I hadn’t before seen online: a collection of articles, clips, and notes from her adventures in libraries and people’s living rooms. Tourmaline had set out on a journey to mine information about friends Sylvia Rivera and Marsha P. Johnson, two trans activists and pioneers of the LGBTQ movement who were instrumental to the Stonewall Riots in 1969 and went on to co-found the group Street Transvestite Action Revolutionaries (STAR) to provide housing and resources to low-income trans and gender-nonconforming people.

Johnson and Rivera contributed so much — including their own bodies and wellbeing — to the burgeoning LGBTQ movement, but like most poor people, brown and black people, and trans people, and particularly those at the intersection of those identities, they were overlooked when it came to the written history of the movement, which has been overwhelmingly helmed by cisgender white people with access to publishing.

It was through Tourmaline’s digital archives on Tumblr and Vimeo where I met superheroines, real-life ones, whom I didn’t have access to growing up. Her archive was free, accessible, and deeply informative, and it introduced me — and my generation who didn’t live through the Stonewall Riots, the formation of the LGBTQ movement and the AIDS crisis — to our radical, resistant roots. She gave us access to know our forebears more deeply: a selfless and revolutionary act.

Tourmaline’s work is where I learned about Johnson’s ideas about queer politics and her own body, and Rivera’s use of searing language to check cis people. It was also where I learned about the enduring power of sisterhood as Rivera mourned Johnson, who was found dead at age 42 in the Hudson River in 1992, as she lived in a shack on the dilapidated Christopher Street Piers. But it was a video clip that Tourmaline had discovered, digitized, and uploaded (originally posted to her Vimeo account) that shifted how I saw myself.

The grainy video shows Rivera barging the stage to speak at the 1973 Christopher Street Liberation Rally in New York City. Wearing a jumpsuit and a blonde wig, she is standing in defiance with the microphone as her only weapon against a chorus of boos from her audience — other LGBT people who were mostly cis, mostly middle-class and mostly white. I was floored from her very first words: “Y’all better quiet down.”

Seeing Rivera speak on that stage proved to me that we — trans people, people of color, poor people — have always been here. We have always spoken up. We have always fought back against systems seemingly intent on us not making it. Rivera’s words pushed me at a critical point in my life, and Tourmaline’s devotion to archiving previously ignored moments in history is what brought me to them.

Just the year before I had made the decision to share my story of growing up trans and black and Native Hawaiian and poor in America, and was working on my first memoir, Redefining Realness, which was released two years later. I was grappling with the sudden burden of representation at a time when there were so few examples in the media of young trans women of color thriving. And seeing Rivera on that stage pouring her heart out at a time when there was no infrastructure to support trans people pushed me to be more bold, more unapologetic, more searing, and more exacting in my words and in my purpose.

I gained so much insight and most of my knowledge about Johnson and Rivera’s lives and their contributions from the research and work of Tourmaline, who has become a dear friend and sister. Without her commitment, I do not think I would have been as useful to my communities.

So I was disheartened when Netflix debuted the documentary The Death and Life of Marsha P. Johnson, directed by David France. I had long resigned not to watch the film because I knew Tourmaline’s dream was to create her own film about Marsha P. Johnson, and she had shared with me, years prior and in confidence, that she believed France had gained inspiration from her efforts and capitalized on her archival research — without reference or credit and certainly without pay. On Saturday, Tourmaline went public with what she had shared with me privately on Instagram.

France denied all claims, which then pushed Tourmaline to stake a claim on her work in an essay for Teen Vogue. In it, she writes, “Until all of our ideas and lives are celebrated and given the resources we need and deserve, so much of our brilliance will remain hidden out of fear of our lives and labor being violated and appropriated.”

On Wednesday, Kamran Shahraray, an archival assistant who worked on France’s documentary, released a statement in support of Tourmaline. Shahraray stated that Tourmaline’s Vimeo were on production hard drives with “her name appear[ing] through other materials,” and wrote, “Based on what I have seen, undoubtedly someone at some point made heavy usage of her work and research.”

In reaction to Shahraray’s critical statement, France then responded through Mother Jones: “I’m afraid that Kamran misunderstood the process of research and documentary filmmaking. The deeper question is: Did we learn anything from finding those videos on her Vimeo page? And that answer is no.”

Having myself gained so much from Tourmaline’s publicly accessible archival work, it’s difficult to believe that a filmmaker making a documentary about Marsha P. Johnson would not have “learned anything” from Tourmaline’s archives. She is the preeminent and foremost scholar on Marsha P. Johnson, and she isn’t called that because she is a black trans woman who is borrowing money from friends to pay her Brooklyn rent — no less has the resources of stable space, funds, and time to write a biography or direct a feature-length film on Marsha P. Johnson. To us, Tourmaline is the expert.

For France, a white, cisgender, gay man, while there may not have been a personal connection or resonance as he viewed and downloaded Tourmaline’s Vimeo, it seems implausible that he didn’t “learn anything” from viewing her work. This statement feels like a purposeful dismissal and an attempt to erase Tourmaline’s contributions and impact — something that far too many historians, activists, and others have sadly attempted to do with Rivera and Johnson.

Let me make it plain: Tourmaline has provided with her painstaking, unpaid journey into the worlds of Johnson and Rivera an enduring portrait of ourselves. She helped me — she helped us, actually — see ourselves. Our power, our resilience, our creativity and our beauty.

In her essay, Tourmaline writes, “As France’s documentary starts to make its way to large audiences, I can’t stop thinking about the voices that have been pushed aside in the process. Too often, people with resources who already have a platform become the ones to tell the stories of those at the margins rather than people who themselves belong to these communities.”

As an activist who uses storytelling to combat stigma, I have always been adamant that we tell our own stories. And while, as a journalist, I believe that anyone has the capacity to tell any story, I nevertheless ask myself these questions when I am approached to write or report a story: Am I the person most suited to craft this piece? Is it necessary for me to tell this story? Is there someone else I know who would serve this story better than I? If so, how can I use my access to ensure they are given the space, resources, and support to tell it?

Media gatekeepers — editors, publishers, film studios and the like — need to begin investing in talent behind the scenes, developing and resourcing marginalized voices to tell their own stories. At the end of the day, it’s about the story and what will enable the audience to truly see, understand and know the life and times of the subject.

I believe our communities and our comrades would have been deeply impacted by a documentary about a black trans pioneer helmed by a black trans pioneer — one who went to Columbia and did community organizing work, one who worked without pay for years researching and digging up artifacts of Johnson and Rivera and made her findings accessible and free, one who had shared personal experiences with her subject and deep insight into queer, trans, racial, and abolitionist politics.

But that film does not — and may never — exist. Someone more conventionally credentialed, more established, and with more industry resources made what will likely go down as the most widely-seen film about Marsha P. Johnson.

Knowing this, though, Tourmaline did not resign in silence. She has done what our foremothers have always done: She persisted, persevered and made a way out of no way. She poured research, her brilliance, and herself into a gorgeously shot reimagining of one pivotal night in Johnson and Rivera’s life with her short narrative film, Happy Birthday Marsha! (see its trailer and support the film here), that she co-directed with filmmaker Sasha Wortzel, which will be released in 2018.

What’s vital to me is that I am not silent as we collectively write the record of our time. It feels deeply vital that I center and celebrate Tourmaline’s contributions. So often, we speak of trans women of color only when they are no longer able to respond. We hashtag their names, uplift them, give them flowers when they cannot smell them.

Today, I need Tourmaline and the world in which we exist to know that she — that we — are brilliant, worthy, beautiful, and the architects of our own narratives, and are deserving of all the flowers.

This was originally published in Allure.