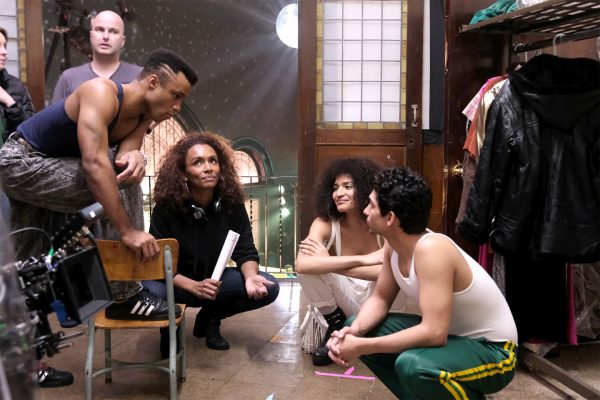 I first met Ryan Murphy on location in Hollywood in July. The set was a nightclub, filled with background actors staged as glistening go-go dancers, shirtless revelers, and twirling drag queens. They were all basking under the glow of a spinning disco ball — a fitting setting for my first Hollywood job interview.

I was flown in from New York City to meet with television’s most prolific showrunner, who was directing the pilot of “American Crime Story: The Assassination of Gianni Versace.” The day’s shoot concentrated on reconstructing a moment when the late Italian designer meets the man who will ultimately end his life. Our own meet-cute began (less tragically) between takes. Murphy greeted me with a double from Starbucks in one hand and his other extended. “I am working on a new show which will tell the story of 1980s New York City through characters in two worlds – the house/ball scene and the burgeoning Trump Organization,” he said. “It’s called ‘Pose.’”

I tried hard not to let my skepticism travel across my face. Trump and ballroom? I asked myself. No two worlds are further apart. It would be much later when I realized that these characters with seemingly disparate experiences of privilege and oppression, access and exile, had place and time in common: the island of Manhattan in 1987.

“I want this show to do more than just present a talented cast of trans actresses,” Murphy said. “I want ‘Pose’ to be uplifting and to give others who have not been given a chance a real opportunity to tell their own stories.”

He then asked me if I was “ready to leave the world of books” for television. I nodded and told him about my journey from my tenure as an editor at People.com to writing two memoirs about my coming-of-age as a trans girl. Though I had been labeled an activist – merely for telling my truth – my intention was to use storytelling to combat stigma, empower my communities, and ensure audiences would feel their way through an experience unlike their own.

“I want to tell stories and to create the mirrors that I didn’t have growing up,” I told Murphy, who suddenly stood up.

We hugged, he walked out and I returned home confused: Was I just hired? Did I nab my first Hollywood gig? Is this how he does everything?

I would soon learn that Murphy acts on instinct and heart. It’s what guided his path-clearing career as a creator who is as unapologetically brazen as he is gay. It was heart that drew him to “Pose” and instinct that warned him that embarking on this series alone would be disastrous.

Murphy, like many LGBTQ people including me, holds a soft spot for “Paris Is Burning,” Jennie Livingston’s 1990 documentary about New York’s ball scene. The Sundance award-winning film is iconic, quotable, beloved, and like most cultural pieces created by folk with access who gaze at those resisting at the margins, it’s also problematic.

This issue of whose gaze, whose stories, and whose bodies were in focus and in leadership behind the camera presented me with much caution as I considered the offer to write on “Pose.” I would soon learn that Murphy was aware of this issue. That’s why he assembled a team of culturally specific collaborators from the ball community, including Dominique Jackson who plays one of “Pose’s” leading ladies, as well as Leiomy Maldonado and Danielle Polanco, who serve as choreographers, and our braintrust of consultants, Freddie Pendavis, Hector Xtravaganza, Jack Mizrahi, Michael Roberson, Skylar King, Sol Williams and Twiggy Pucci Garçon.

Murphy’s source material for “Pose” originated from a script written by Steven Canals, a queer Afro-Latinx from the Bronx who earned his MFA in screenwriting from UCLA. Canals’ writing, which came across Murphy’s desk in 2016, centered on Damon, an aspiring dancer who finds himself homeless in New York City after being kicked out of his home for being gay. He is given refuge by Blanca, a trans woman who’s a mother in the ball scene.

The notion of a trans woman saving a young boy’s life moved me. It was a radical departure from what I had seen on screens. I grew up the middle of five kids raised by a working single mother. The television served as a babysitter, of sorts. I devoured shows as a young viewer, from re-runs of classics like “I Love Lucy” and “Designing Women” and soaps like “General Hospital” and “90210” to ’90s sitcoms like “Living Single” and “Family Matters.” I was thoroughly entertained by these shows, but as a black and Native Hawaiian trans girl, I never felt fully reflected.

When girls like us flitted onto my screen, we were seen through the narrowest lens — either as points of trauma, treated as freaks, or mere punchlines. Rarely were we given a chance to be the center of the story, to be the protagonists, the antagonists and the damn villains. And I knew with “Pose,” I would hold the pen, writing narratives that would show the totality of what it meant to be brown and black, to be trans and poor and femme in an era in New York City dictated by a series of ills, from HIV and gentrification to crack and greed.

I joined the writer’s room of “Pose” in August, and my hiring was historic. I am the first trans woman of color to be hired as a writer on a television series (previous staffings include white trans women writers, including Our Lady J for “Transparent,” Imogen Binnie for CBS’s “Doubt,” and Lana and Lilly Wachowski for “Sense 8”). Murphy then promoted me to producer within weeks of my hiring, and pushed me, despite my own trepidation, to direct episode six of our first season.

Though the series lives under Murphy’s production banner, he has taken a back seat with “Pose,” using the series as an opportunity to champion the communities our show represents. Not only is he donating all of his profits from “Pose” to organizations that directly serve trans and gender-nonconforming people (including the Audre Lorde Project, Fierce, House Lives Matter, and the Sylvia Rivera Law Project), he’s empowered Canals and me, giving us unprecedented control of the narrative and direction of the show, urging us to cast nearly every part to ensure the show truly represents the characters onscreen. We’ve casted and employed more than 100 trans people. This is extraordinary especially when trans people are an overwhelmingly underemployed demographic and have watched with gritted teeth as non-trans actors have embodied our realities onscreen.

“Pose” has also made history for hiring five trans actresses – all of color – as series regulars. But our leading ladies cannot be defined solely by their trans-ness. They are, like all of us, whole beings. Their trans-ness may not the sole focus of our story, but it’s also not sidelined. They grapple with their gender, just as they grapple with their bodies, their loves, their families and their dreams. Their narratives are not limited by their transitions and rarely do we meditate on their origin stories. Instead we center on what it is like living, struggling and striving in a world not built for them to thrive.

Our characters are the center of their own stories rather than plot devices, serving as martyrs who teach non-trans protagonists a lesson about authenticity and self-assuredness. No, in the world I am writing, these women are the heroines I have always been waiting for. They are tethered to one another. They support and challenge one another. They love on and dance and laugh and yes, shade one another. This is what sisterhood, family and resilience looks like, especially in an era where black and Latina trans women are being hunted down for merely existing. In 2017, 26 trans people were killed in the U.S, and nearly all of them were women of color.

So it’s an indescribable feeling to be on set sitting in a chair with my name on it, directing a script that I also wrote, watching these actresses, some of whom have never been on a set before, be given a chance to truly shine. I witness them with their own stand-ins, lighting fine-tuned to their melanin, with dressers fretting over every detail of their apparel, and textured hairstyles representing the fullness of our community. Finally, they are centered, and to see them readying for their close-up, delivering dialogue that I’ve written, is a full circle moment, especially for that frizzy-haired little trans girl I once was yearning for reflection.

Our culture is ripe for “Pose,” too. We’re grappling with an intensely divided political landscape, where the President and his administration are rolling back hard-fought gains for trans people, from the restroom and schools to healthcare, where black and brown people are fighting for the right to exist safely, and where industries, from Hollywood and Silicon Valley to Wall Street and manufacturing plants, are having a reckoning when it comes to gender disparity.

In my most ambitious imaginings, “Pose” would be a salve and a possible solution, showing viewers what inclusion looks like, what community and family looks like, what radically loving and accepting one another, especially those most rejected and discarded, looks like. It’s a vision of how I see my sisters and myself – whole, complicated, vulnerable, resilient and deeply connected to one another.

My hope is that my work on “Pose” does more than merely make history. I want it to make people feel their way through our characters, whose experiences have for so long been othered, invisibilized and sidelined. Though my writing, producing and directing in this space may be deemed the first, I hope it won’t be the only – or the last.

Our show is just a beginning – a catalyst that hopefully inspires others, who haven’t been reflected, to embark on creating their own mirrors.

This was originally published in Variety magazine.

PrevPrevHow Tourmaline Introduced a Generation to Marsha P. Johnson
NextLessons from POSE: What I Learned From My First Directing ExperienceNext