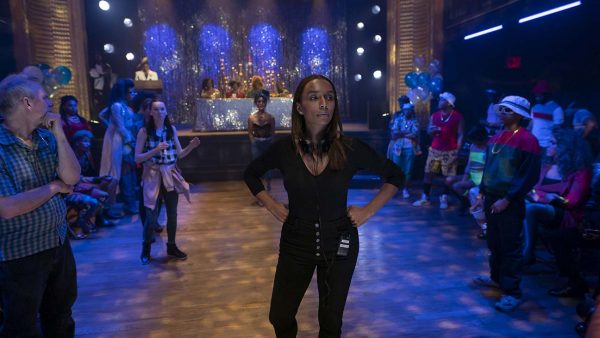 Lessons from POSE: What I Learned From My First Directing Experience

My father taught me to swim by throwing me in a pool when I was 7. “Stop wailing,” he instructed. “You won’t sink if you move your arms, kick your feet and keep your head above the water.”

Learning how to direct on the job is equally daunting. I didn’t attend film school, didn’t have a reel and hadn’t even daydreamed about sitting in the director’s chair when my boss and mentor Ryan Murphy pulled me aside and told me I would be directing an episode of Pose that we wrote together, “Love Is the Message,” during our first season.

I wish I could say I leaned all the way into this opportunity, but how could directing seem like a possibility for someone like me? In all my years of watching television and film, it was rare to see a woman who looked like me occupy the “Director” title card. Sure, there were some notables in my youth — Kasi Lemmons, Julie Dash, Gina Prince-Bythewood, Millicent B. Shelton — and others taking the mantle today: Ava DuVernay, Cheryl Dunye, Tina Mabry, Melina Matsoukas, Dee Rees. But the fact that I can list them shows how rare it is for our people to tell our people’s stories.

Women accounted for a reported 17 percent of directors in television across all platforms during the 2017-18 season. I’m unsure how many were women of color, but I can attest that none were trans women of color. As a woman, a black person and a trans individual, I carry the gift and burden of multiple communities in an industry where those communities rarely hold power or control. I’ve had to carve out a path where there was none. “Who better to tell this story than you?” Ryan asked when I questioned his offer. “You wrote it, and you lived it. No one is more qualified.”

Ryan didn’t only give me a shot and words of encouragement; he invited me to shadow him and director Gwyneth Horder-Payton. He was a phone call away when I started prep, he stood nearby as I completed my first few days of shooting, and he stepped away when the doubt finally subsided and gave way to greater confidence — a confidence that I can now impart to others directing for the first time.

One thing that helps shut down all that self-doubt is recognizing that you can deliver the goods. I had a vision and was exacting about it. Having that vision doesn’t mean you don’t have to compromise; in television where you have eight days to shoot 48 pages, compromise becomes your companion.

No one expects you, or anyone, to know everything. Ask for advice, consultation and second opinions from your crew. Everyone is afraid to be seen as incompetent, but true incompetence is not knowing and still acting without consultation. I consider being on set, even in my capacity as a writer and producer, as my own film school.

The prep period is your safe space, the time to ask questions, troubleshoot and sit in your locations to work out blocking. On your first day of shooting, arrive at least 30 minutes before crew call, so you can walk the set again without the hustle and bustle of a working crew. Make time for a private rehearsal to collaborate with your cast. Carry two rolled-up copies of sides in your pockets: one for your notes and a second in case your actors need a copy on set. And a note on fashion: Wear a jacket and pants with pockets. (You won’t believe how many times you’ll need your phone, your pen, your sides and a place to hold your Comteks.)

As you move through your days, you will be met with a series of questions – from department heads, from wardrobe to props. Be confident about your interpretation of the script, trust your instincts, and be swift and decisive. Your job is to clearly communicate and convince your crew of your vision so that they can help you execute it. Though I am deeply collaborative (the best ideas always win, even if they are not my own), I do not allow my crew to question or make me doubt myself. Trust me, I do that more than enough. As a young woman of color, I am often asked on set, “Are you sure?” It’s a dangerous and inefficient question. Inefficiency gets in your way. I often respond: “I am sure. Let’s try it.”

During shoots for each of the three episodes I’ve directed so far — including Pose seasons one and two and The Politician on Netflix — my closest confidante is the script supervisor. I whisper in her ear throughout the day, allowing myself to be vulnerable, asking for a second opinion when I’m unsure. “You think I got it?” “Should I move on?” They’re your go-to counsel.

At the end of each day, I write notes to myself and my editor: what worked, moments I loved, cut pieces I marked, things I will need in post. This is vital because by the time you enter post to work on your director’s cut, you won’t remember every detail of every shot and every take.

Ultimately, trust yourself. Every experience you’ve had brought you to this moment. It’s your shot to show the world who you are and what you are capable of, and hopefully — if you’re a member of a group that is underrepresented in the space — to prove that more folks should be given a shot to tell their own stories.

This was originally published in the Hollywood Reporter.

PrevPrev‘POSE’: The Power & Purpose of Authentic Storytelling
Next‘We Are Your Sisters, Too’: Essence’s Black Women in Hollywood AwardsNext