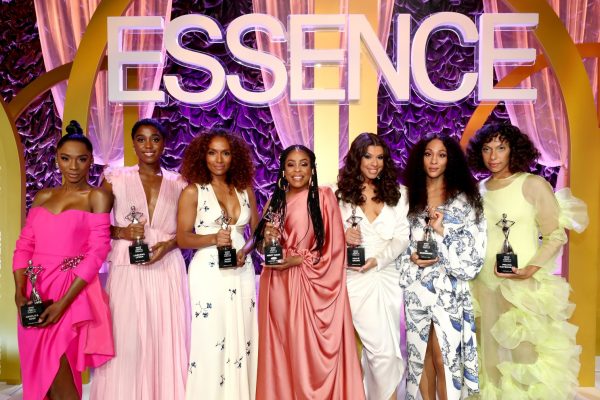 ‘We Are Your Sisters, Too’: Essence’s Black Women in Hollywood Awards

Being in this room, on this stage, with my sisters and siblings, is deeply affirming. It’s an honor to be in a space that celebrates and centers our stories.

For 50 years, ESSENCE has recognized black women in a culture that too often overlooks us, our work and our contributions. Essence remains a vital intervention, choosing to see us, how we see ourselves, in a culture that rarely ever does. Thank you for seeing us!

It is not lost on us that so many of our sisters, siblings and forebears are rarely, if ever given this kind of affirmation. As black trans women who are aware that our life expectancy is 35….who’s own womanhood and humanity is often questioned…who resist racism, misogyny and transphobia, to be given the stage today tells all our sisters watching that no matter their path to womanhood, that they are deserving of being seen, heard and affirmed.

Too often, black trans women and black queer and gender-nonconforming people put their bodies on the line every day to merely be themselves. Grappling with homelessness, joblessness, a lack of access to healthcare and education. Our own people’s intolerance and willful ignorance pushes our sisters out of hostile homes, out of intolerant schools and churches, and into detention homes and prisons and deeper into poverty.

These alarming issues remain widely unaddressed because we, as a culture, do not acknowledge that trans women are women, that black bodies are valuable, and that black trans girls and women are worthy of protection and care. Our struggle for black people must include black trans and queer people.

This award reaffirms that our stories, our lives and our experiences matter, and reassures that the way we tell it, from the perspective and talents of those who’ve lived it, is most impactful.

POSE has entered millions of homes, enabling viewers around the world to meet, know, love, and root for five trans heroines, characters who on other shows would be mere sidekicks, subplots or punchlines. POSE moves these characters from the margins to centerstage. And I am awed everyday by the presence and the talent of MJ Rodriguez, Dominique Jackson, Indya Moore, Hailie Sahar and Angelica Ross. They are the heroes I’ve always been waiting for.

The six of us together have helped change the face of the American family drama, earning us Peabody and AFI Awards, Emmy and Golden Globe nominations, the covers of Entertainment Weekly and Elle, and campaigns for Valentino, Louis Vuitton and Moschino.

On POSE, we tell a story of hope, love and community, one that can serve as an offering to those who make a way out of no way: Building houses after being left on the streets. Creating family after being disowned. Carving out a safe, sacred space in a world that offered them none. I hope our show provides black girls everywhere a mirror to better see themselves, letting her know that no matter how different, how misunderstood, how marginalized she may feel, she is worthy.

She is worthy of taking up space on screen and in the streets.

Today, we accept this honor on behalf of all those courageous enough to show themselves in a world intent on erasing and shaming us. Your mere presence is revolutionary. In the world we see, all black girls are protected and nurtured, liberated and centered. We are centered because we matter.

We are centered because our own liberation as black people, regardless of our gender and sexuality, lies in the wellbeing and survival of all of our sisters, especially those most vulnerable and most often overlooked. I hope our presence on this stage lingers with you.

We are, have always been, and will always be your sisters. Thank you.

PrevPrevLessons from POSE: What I Learned From My First Directing Experience
NextReimagining ‘HOLLYWOOD’: How Television Can Be a Force for ChangeNext