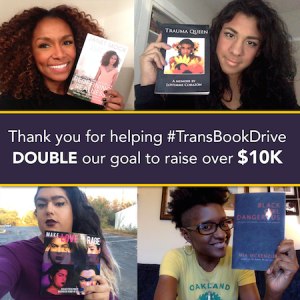 #TransBookDrive is Janet Mock’s annual storysharing campaign, started in 2013, as an effort to center our stories in some of the most marginalized spaces. With the paperback release of my book
Redefining Realness, I led my second annual #TransBookDrive, partnering with biyuti publishing, Black Girl Dangerous, and LGBT Books to Prisoners, with the initial goal of fulfilling 200 requests from trans folks in prisons across the United States, free of charge.

In the course of a day, we met our initial $5,000 goal, and by the close of the 30-day fundraising campaign, we doubled our goal, enabling us to expand the reach of #TransBookDrive to do the following:
• Double the amount of books in each care package.
• Increase our shipments from 200 packages (half with one book; half with two books) to 250 packages (all with two books!).
• Send free copies of ‘Redefining Realness’ to organizations supporting trans communities.
• Donate funds to our organization partner, LGBT Books to Prisoners, to continue shipping and stocking their shelves with more books for future request from trans prisoners.

Thank you to those who helped us double our goal in 2014! 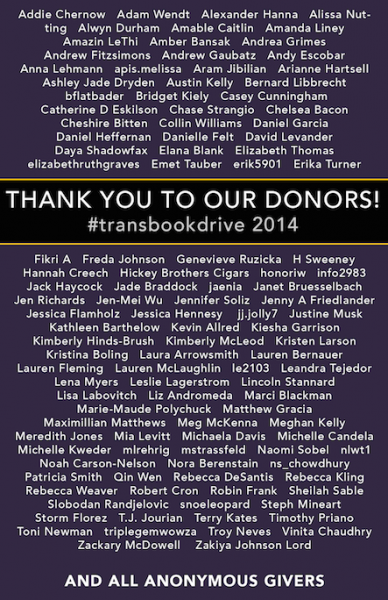 About My Very First #TransBookDrive

After announcing that my book was available for pre-order in September, I was humbled by how many people said they couldn’t wait to read my memoir. I was also struck by how many private messages I received from trans folks saying they were saving their money to buy my book, to support me and my work. Though writing and publishing my first book is a dream realized, it was also bittersweet because I knew many community members simply couldn’t afford it.

So I eagerly began brainstorming an efficient yet collective method of making Redefining Realness more accessible financially, a method that centered marginalized trans people’s agency and rang true to something Miss Major Griffin-Gracy, trans elder and foremother of our movement, said at the Miss Major-Jay Toole Building For Social Justice naming ceremony, “If trans girls of color can’t get to the building, you need to drive a bus and get those girls here!”

So on Christmas Eve 2013, I launched the Redefining Realness Storygiving Campaign. Jen Richards, my friend and early reader of Redefining Realness, helped me out, having inspired me to start the campaign after witnessing her #RedefiningRealness Twitter giveaway (in which she bought 5 books for low-income trans folks and doubled her gift with a friend’s matching donation).

The Storygiving Campaign served as a bridge, connecting those who could give with those who requested to receive. It was a way for us to lift one another up and ensure that those with meager financial means had equal access to this text. The campaign asked low-income trans people in the U.S. to request books by completing a simple Google form (name, contact info, mailing address, and identity labels), and asked community members, allies and supporters of the book to give a monetary gift through a PayPal donation button. Each $20 gift covered the pre-order price of the book, taxes and Paypal service fees. Jen and I used our Amazon Prime accounts to cover shipping costs in the U.S.

My initial hope was to fulfill 50 books. That seemed doable. Within 24 hours, though, we received 77 requests for books (showing the community’s desire for the book and its financial need) and $1100 in donations, which covered about 55 books. Soon, I was overwhelmed by the response to the campaign, which surpassed the 100 mark within three days. It was at this milestone when I realized I needed to imagine the Storygiving Campaign’s end. I decided that 120 books orders would be a major feat yet also realized that I needed to reserve 20 remaining requests spots for trans youth and trans women of color, who according to demographics obtained from our request form, were underrepresented in the campaign.

On December 30, after its one-week run, the Storygiving Campaign received 127 book requests from a diverse lot (including trans women of color, two-spirit people, trans Latinas and trans latinos, white trans folk, genderqueer folk, mahuwahine, non-binary femme-ish trans youth, black trans men, mixed race trans women, disabled and HIV-positive folk, and many other shades and intersections from our vast community). It also gathered nearly 70 folks who pooled $2500 in total donations, marking the successful end of the Storygiving Campaign. Every trans person residing in the U.S. who submitted the address request form completely and correctly had their order request fulfilled, leaving Jen and I with the exhilarating yet tedious task of ordering the 127 books on Amazon.

Though the first Storygiving Campaign is over, I encourage you to continue giving, either by purchasing books for trans people, groups or organizations in your communities![/vc_column_text][vc_column_text]

Order your copy on Amazon