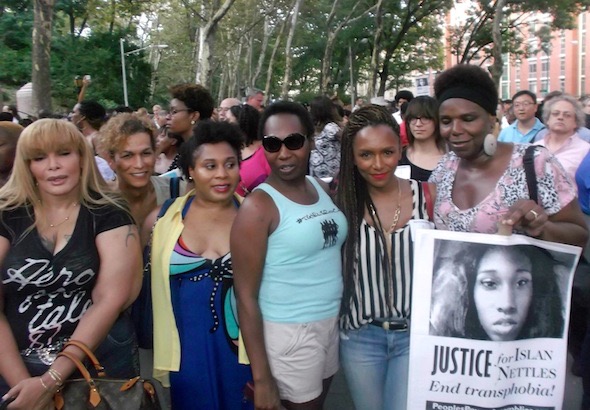 For My Sisters Who Showed Up for Islan Nettles & Ourselves

I stood in a crowd with you last night as we cried and cringed, applauded and gasped, embraced and turned away. I was there with you last night and I saw you in all your fierceness, despair, hope and rage. I also saw love, the same love that Chanel and Laverne wielded when they took the stage, speaking Islan Nettles’ name and pronouns with such authority ensuring that no one rewrote the life she brilliantly lived.

Love is what enabled me to walk out of Jackie Robinson Park in Harlem just a block from her attack and not be overcome by the rage of the entire proceeding, a proceeding that did not respect who Islan was – a young black trans woman – by failing to consult us, failing to take our pain and undeniable vulnerability into account, failing to allow us to be heard, failing to educate a grieving family about the necessity of pronouns, failing to correct cis folks who took up too much space and called Islan, therefore every trans woman in the crowd, out of her name.

We were told this vigil was focused on Islan’s family versus “political” issues like “transphobia” – as if the personal and political can be separated so effortlessly and cleanly. We are still vulnerable – just as Islan was – and that is not a political issue. That is truth, a truth that we are reminded of every time we step out of the comfort of our homes and are called out of our names, identities and bodies on our streets. And the organizers frankly ignored our truth and that pain paired with the grieving of a sister beaten to death at the tender age of 21 is unbearable. 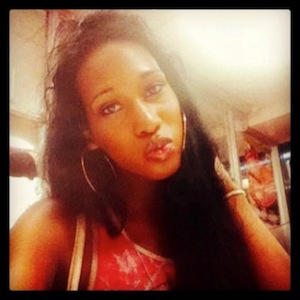 Islan Nettles, a 21-year-old trans woman who died from injuries from an attack on August 22

Yesterday we were thanked for being silent and respectful to a grieving family seated center stage. We were instructed to keep politics at the door though politicians had a front-row seat with camera crews readied for their election year soundbites. We were scolded when we fought back against the pain inflicted on our bodies each time a speaker misgendered our sister and erased her identity. And we were congratulated, too, when we held our tongues.

Our tears and our presence did the talking, and I am in awe of the resilience of each of you.

You turned out last night, in a sea of black and brown and creamy faces, beat by makeup, pain and tears. I know how hard it was to leave your apartment, to get on a subway in the daylight and make it to Harlem in one piece. It takes courage to make yourself publicly vulnerable – and I want you to know that I saw you and seeing you was a gift because I have never been in a space with so many girls, and I know that that was the collective result of each girl who posted that flyer on her Facebook wall and messaged another girl, urging her to overcome her anxiety and traumas to stand together with us.

And there we stood – together.

Deja, Kiara, Lourdes, Trina, Koko, Mariah, Tanya, Madison, Octavia, Daniella, Jennifer, Cecilia, Brooke, Jyasia, Egyptt, Vanessa, Stephanie, Prerna, Evie, Asha and so many more of you whom I dedicate to knowing better. Frankly, we must all do better in knowing one another, banding together, speaking up together, and demanding much better together.

We heard politicians’ names and offices spoken more than our own. We saw more cis folks who did not know Islan (or the complexity of the lives we live or the difference between sexuality and gender identity) take the stage than we saw her actual girlfriends who stood idly in the crowd, who emailed organizers about speaking but received no response. And we heard her called out of her name countless times, to rarely a correction, and when they were corrected by trans folk in the audience – they were reprimanded for not being “respectful.”

My heart dropped each time I watched your face cringe with each misgendering. This is more than semantics, more than a family issue, this is our lives. We all know Islan was beaten to death because she fought hard to be Islan, to be she, to be her. Many of us come from black families, complicated families, families that take their own time with pronouns and names – so we were quiet, giving a grieving mother space to mourn her baby – yet we could not ignore that the misgendering that happened in that space was triggering and it was not merely a private matter. It was public and it was made public by the cis gay and lesbian organizers who distributed the flyers that called it a “community vigil,” who sat the grieving black family center stage for the media to photograph, who invited the local camera crews to capture the footage, who gave the mayoral candidates a “gay community-friendly” photo op.

Organizers have told us that last night was not about us, and that was clear from the beginning. Yet I will not ignore the fact that the footage living on YouTube and every local news broadcast, will affect us and our lives, miseducating and misguiding folks (even our own families) on how to treat and name trans women in death and life.

The only reason I left not feeling defeated was because of you, in all your resilience, beauty, brilliance and ferocity. You held me up, you told me that we would get through, and you showed up despite knowing the open secret we all carry: that Islan was not the first to fall and she will not be the last.

Yet you still dare to be seen, to live your life, to share your truth. You and I know that we are not stereotypes or statistics, that our lives are not disposable and that we deserve and demand so much better.

I am weeping and snapping in celebration of you as I write this letter. Last night I stood beside you and your presence was loud and clear. Though we were an afterthought, you, my dear sister, are always my first. I see you. I hear you. I love you.