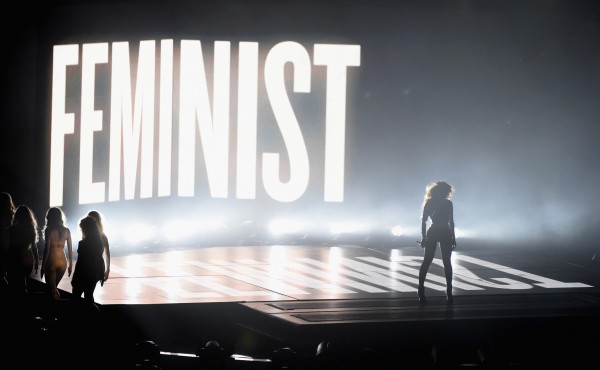 I have a reluctant relationship to labels, especially when I feel forced to clothe myself in them to signify my identity. James Baldwin created this beautiful line about identity that I included in my book which speaks closely to how I feel about labels: “Identity would seem to be the garment with which one covers the nakedness of the self, in which case, it is best that the garment be loose, a little like the robes of the desert, through which one’s nakedness can always be felt, and, sometimes, discerned.”

Trepidation is a solid word to describe my feelings surrounding terms like activist, spokesperson and feminist. I remember bell hooks, one of the most widely read black feminist thinkers, reading an interview I gave to Bitch magazine, in which I boldly state that I don’t personally identify as a feminist. Immediately, she called me for a longer explanation.

Was that a misquote? she asked. No, I said. Why aren’t you a feminist? she pushed. I told her that I felt I wanted to push past labels. Labels were given to me without my consent ever since birth. She asked me why I embraced trans to qualify my womanhood. I told her I believe it’s a political statement for me to declare that nothing is wrong with being a woman who is trans, and I chose trans because it was mine. She then pushed, “To say you’re a feminist is a political statement. So why not feminist?” Simply, I said, I never felt like feminist was mine as I felt that black and trans and writer and woman belonged to me, and as a black trans woman writer I never felt like I was centered by feminism. I never felt it was created for or by me.

“Well, I say it’s for you. It’s yours so claim it!” bell said before ending the call.

That conversation served as a catalyst for my own excavation as to why I was reluctant to embrace the term. And as every pop culture-soaked headline has claimed recently I am not alone in my reluctance. Many women of my generation are on similar journeys with the term feminist, from Lady Gaga to Shailene Woodley and Taylor Swift (who actually has since experienced her own feminist awakening, thanks to pal Lena Dunham). And even my own teen idol Beyonce Knowles had qualms about the label when British Vogue asked her if she was a feminist in spring 2013.

Often, I wonder if it was the sound-biting of that interview (specifically her use of “very extreme” and the myth that marriage is something feminists rally against) that led Beyonce to research the term feminist, and I wonder if her research led her to Chimamanda Ngozi Adichie‘s TED Talk, “We Should All Be Feminists” and if Adichie’s reciting of the dictionary’s definition of feminist (a person who believes in the social, political, and economic equality of the sexes) enabled the singer to say, yes, I can be a happily-married, bootylicious mama who believes in equality, yearns to be successful and sexy and calls herself a feminist — and this is flawless and I am going to sample Adichie’s words in my new song.

Since her self-titled album was released in December, I have seen the totality of that album as Beyonce’s feminist awakening, in which she boldly defines herself for herself — and for us all — a task which Audre Lorde reminds us is vital.

Last Sunday, I watched the MTV Video Music Awards solely because Beyonce was performing and would receive the Michael Jackson Video Vanguard Award (MTVs version of a lifetime achievement award). I was one of the fans live-tweeting, re-centering Beyonce with the hashtag #BeyMAs. But what I did not expect was for Beyonce to center herself, literally, as a feminist during her 16-minute performance. In a culture in which young women seem more and more apprehensive about the image, meaning and importance of feminism, Beyonce provided a mainstream audience and millennials everywhere with a clear definition of feminist, provided by Adichie whose words flashed behind an assembly line of women before FEMINIST overtook the background as Beyonce took her foreground.

To say I was emboldened by this image would be an understatement. It became the crescendo in my own feminist soundtrack, sparked by my conversation with bell months earlier. As a fan who grew up in front of the television with pop stars, VJs, and sitcom characters serving as my playmates, Beyonce was my No. 1 friend-in-my-head. On that VMAs Sunday, I watched Beyonce journey from Destiny’s Child to solo star, from Single Lady to wife and mother, from Independent Woman to feminist cultural icon. I cherished my relationship with Beyonce so much that I dedicated Chapter 14 of Redefining Realness to relay what Destiny’s Child and Beyonce meant to my coming-of-age and search for identity as a teenager.

Pop culture may be dismissed as lowbrow, but to me it is the culture that matters most. Popular culture helped raise me.

Beyonce Knowles and bell hooks and Barbara Smith and Audre Lorde carried me towards claiming feminist as my own, as one garment in which I drape my body to navigate this world. Feminist speaks to me because those women and their work have always spoken to me, and these are women who choose to wear this label and claim it as theirs.

But bell and Barbara and Audre have feminist cred, their work and commitment to feminism stands on solid ground, but Beyonce’s feminist awakening and stance has been widely questioned. Partly, it’s because she appears to be at the beginning of her journey. Partly it’s because her intentions are framed as a marketing ploy. Largely, it’s because her work is not viewed as “serious” work. Pop culture is never framed as a matter that matters. She’s often dismissed because her work exists outside the bounds of academia, outside the gravitas of letters, and solidly based in entertainment, media and music. I am in my 30s and was emboldened by Beyonce’s feminist stance on that stage, and can’t help but believe that that image will be equally as powerful to young people who witness that moment, whose first engagement with feminism will be that moment. Maybe, just maybe, Beyonce will serve as the bridge between pop culture and feminists like bell and Barbara and Audre, maybe some young woman bobbing her head to “Blow” or “Partition” or “Flawless” will do so while reading Ain’t I A Woman? or Homegirls or Sister Outsider.

So I applaud Beyonce and her feminist stance, a declaration of her own independence as a leotard-wearing, butt cheek-baring, Blue Ivy-toting, equal pay-advocating, Independent Woman-saluting, imperfect flawless feminist. And I thank her and our feminist foremothers for fortifying my own declaration as a feminist. Among my duties as a feminist will be to protect our freedom to self-identify. I believe we waste much of our efforts policing one another — one of the many workings of patriarchy is to busy us with policing each other’s choices rather than protecting them. Our duty is not to police feminists, our duty is to use feminism as a tool to check systems that uphold racism and slut shaming and sex worker erasure and anti-trans woman bias and general policing of other people’s choices.

Because of Beyonce, because of Audre, because of bell, because of Barbara and their feminist stances I no longer feel as if feminism is not for me. I will wear my feminism proudly as a crop top-wearing, curly hair-teasing, pop culture-obsessed, sex worker-embracing, LGBTQ-championing black feminist woman writer.

ps: I am not here for folks saying that a feminist owning her sexuality and adorning her body in clothes she chooses, makes her less of a feminist. The clip below is from AM Tonight, but I point you to Beyonce’s own defense: “[Being empowered] is exactly why I can [wear those outfits]!