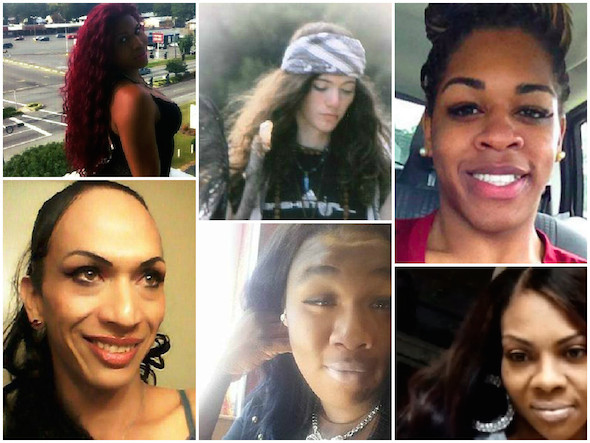 This morning I read about the murder of B. Golec* in Ohio. They were stabbed to death by their own father. Golec was only 22 years old. Their death marks the sixth trans woman** or gender-nonconforming person to be reported murdered in the U.S. in 2015. It’s not even March.

As the New York City Anti-Violence Project noted in their tweet about Golec’s murder, “This time in 2014 we knew of no homicides of Trans women in the US. As of now there are AT LEAST SIX.”

This time in 2014, just a year ago, Laverne Cox and Carmen Carrera had publicly challenged Katie Couric; I sparred about language and identity on CNN; Cox’s Netflix series Orange Is the New Black was preparing for its second season; and my memoir had landed on the New York Times bestsellers list. This was the highest media saturation for trans women of color in U.S. history. As a writer and journalist, I had been forecasting the game-changing moment that was soon to come in May: Cox, a black trans woman from Mobile, Alabama, appearing on the cover of Time magazine.

After decades of erasure, trans women of color were finally garnering mainstream attention. Cox used her time in the pop cultural spotlight to not only advance her acting career, but to tell the stories of women like CeCe McDonald. We both stood behind Monica Jones as she resisted police profiling in Phoenix, Arizona, and trans Latina teen Jane Doe as she was unlawfully held in an adult prison.

Personally, I know that my visibility has to be more than just about my own pursuits. When I walk into a space, I am cognizant of the fact that I am bringing communities of people with me, communities that have historically been exiled and silenced. The weight of that responsibility never lightens, even as I navigate uncharted terrain as a TV host. My show So POPular! explores the intersection of popular culture, representation, politics, identity and community. Though it doesn’t explicitly cover trans issues, it’s a space created and fronted by a trans woman of color, so the lens to which I explore topics on my show is that of a trans person, a black person, a woman of color. My goal is to take the focus away from myself as a subject, and instead be the person asking the questions, shaping the conversation.

Yes, trans women are being murdered. Yes, trans women of color have gained mainstream visibility. But trans women, particularly those of color, have always been targeted with violence. The differences now? There are some systems in place that better report violence and there is finally visibility of a select few that helps challenge the media’s framing of these women’s lives.

But cultural representation is just one piece of the social justice pie, and we must be clear about one thing: Trans women of color have had one year of visibility in the media, after decades of erasure (think about how many times historians, archivists, filmmakers or books mention the revolutionary work of Sylvia Rivera, Marsha P. Johnson or Miss Major Griffin-Gracy). It’ll take more than a year of a few trans women in media to transform decades of structural oppression and violence, decades of misinformation, decades of exiling.

We are not existing in a fairytale where the very recent successes of a few individuals — whether that’s Laverne or Carmen or me — could quickly and radically transform the lives of our sisters who are resisting in already struggling communities, who are navigating poverty, homelessness, and joblessness while also facing high medical and educational costs, police profiling and incarceration as well as HIV/AIDS, the risks of underground economies as well as the looming threat and reminders of violence.

When I appeared on Real Time with Bill Maher last week, I mentioned the violence that trans women, particularly those from low-income and/or people of color communities face, during the show’s “Overtime” segment.

“There is a lot of violence, right?” Maher asked

I nodded and responded: “So much of it is linked to the idea that women are not valued, people of color are not valued and trans people are often invalidated in our society. So when you throw that all into one person’s body, there’s a lot of targeting that comes into that space. We need to have a national outrage over these bodies that no one is protecting.”

Maher then said, “I thought, and maybe I’m wrong, that the violence came because the transgender person didn’t tell the guy about their past and then the guy kissed her or something and then found out. And he’s like, ‘Oh now, I’m a homo.”

I challenged Maher by telling him that trans women are not being targeted solely because men find themselves attracted to us. No woman deserves violence. Period. We do not exist to “trick” or “deceive” men into sleeping with us. Trans women are targeted because we exist at vulnerable intersections of race, gender and class. My sisters are vulnerable because no one movement has ever centered the bodies, lives and experiences of these women, except for the severely underfunded, largely volunteer-staffed work of organizations run by and for our communities (from TGIJP, Casa Ruby, TransLatina Coalition, Sylvia Rivera Law Project, TWOCC, TransJustice, to name a few).

Trans women of color dangerously fall in between the cracks of racial justice, feminist and LGbt movements.

Our visibility at this particular moment in culture is helping reshape the narrative of trans women’s lives, it’s helping those who may not know a trans person get familiar with the lives and struggles of trans people, it’s helping push media gatekeepers to report on our lives with a more just and true lens (though it still seems to be struggling when it comes to Bruce Jenner’s alleged transition). What we can’t expect this visibility to do is cure our society of its longstanding prejudice, miseducation and myths surrounding trans women.

Even on the most liberal shows, trans women are still often punch lines (see any lazy joke targeting Jenner’s femininity and body). Even in our moment in the media spotlight, one fallen white trans body garners mainstream headlines over the consistent murders of those that are black and brown. Even in movements organizing against violence against women or black and brown bodies, trans women of color’s bodies are not prone to mass mobilization and I watch as my sisters and siblings speak with one another about protecting trans bodies with hashtags #blacktranslivesmatter and #translivesmatter.

I point out these disparities in an effort to better frame this moment we’re existing in, as someone who has been privileged with access to visibility, as someone who grew up with little access to mirrors that represented me. I am humbled that I can be one such mirror for girls growing up like I did. Representation is an affirming start, but it’s not everything.

There’s much we should be applauding, yet as we applaud, we must also be aware of those women existing outside of the media’s narrow lens, the women organizing, the women on the streets hustling, the women rejected from shelters and improperly placed in men’s detention and prison facilities, the women volunteering their limited resources to support communities of trans folk who’ve been overwhelming neglected by movements.

The names of our sisters shouldn’t only make headlines when we walk a red carpet or lay in a casket. Our visibility shouldn’t be subject to such extreme circumstances. We’ve grown too accustomed, in the past year, to speaking the names of Laverne Cox and Janet Mock, and giving ourselves social justice cred for doing so. This is dangerously tokenizing and speaks to the hypervisibility of women of color who are expected to not only carry their dreams but the dreams of an entire race and people with them.

It’s part of the reason why I am weary of amplifying these women’s deaths because it often feels like these women’s names are only spoken by the majority of us when they can no longer respond. But I must speak their names and when I do, I am aware that my sisters do not need to be reminded of their vulnerability and the threat of violence that looms over their lives.

—
* When trans or gender-nonconforming people are killed, it is often family members who get the final say in determining how the media genders their fallen loved one. There’s been much discussion about Golec’s gender identity. To respect the possible fluidity of Golec’s gender, I’ve updated this essay by changing Bri Golec to B. Golec and used gender neutral “they” pronouns.
**Since publishing this essay, I am aware that the “6 trans women” should be qualified with “at least six trans women were reported to be murdered.” On Feb. 18, Kristina Gomez Reinwald (aka Christina Grant Infiniti) was found dead in her home.
***Much gratitude to Mitch Kellaway who has been consistently reporting on each of these women’s deaths with an intersectional lens.